There is a group of elite quarterbacks in the league right now that are very tough to fade week in and week out in cash games and that’s the case again here for Week 4. Allen is QB2 in DraftKings scoring behind Lamar Jackson (who he’s playing) and comes in here with the highest team implied total on the week. The Bills are firmly committed to just throwing it all the time and I think people will be going back and forth between which QB to play in this game. It’s worth noting that it sure seems like Lamar is running super hot on touchdowns with 10 passing TDs in just 88 attempts. I’ll take Allen here.

Meanwhile, Jalen Hurts is QB3 in DraftKings scoring despite having thrown only four touchdowns through the first three weeks. There would seem to be positive touchdown regression coming his way and the Eagles have the second-highest implied total on the week at 27.5 points. His team has scored the second-most points in the NFC and Hurts is second in the league in rushing yards for quarterbacks. And he’s been pretty accurate too, compelling 67% of his passes. The touchdowns are going to come and if they do Hurts might actually be underpriced here.

Strongly consider Jared Goff at $5900 on DraftKings. The Lions have scored the second-most points in the league through three weeks and could be in a shootout here against Seattle in a game with a 50 over/under. 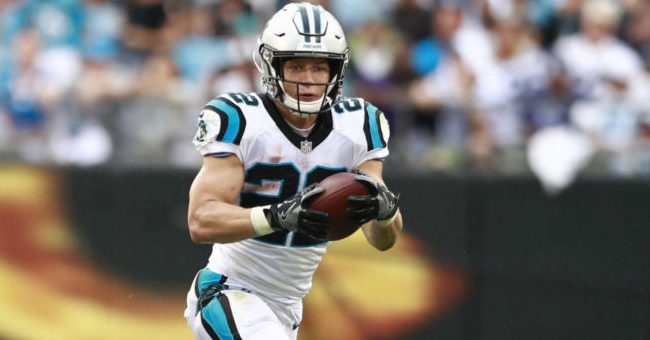 It hasn’t been the greatest start of the season for CMC and the Panthers’ offense, but we are most definitely buying low now. He’s coming under $9K on both sites and gets a matchup against a Cardinals ranked 31st in DVOA on defense through the first three weeks of the season. He’s played 84% of Carolina’s snaps this season and they just haven’t really been in a pace-up matchup, until now. This is a smash spot for McCaffrey who is coming too cheap now that he’s had a few “down” weeks.

D'Andre Swift is going to miss this game and that’s going to leave a significant amount of usage coming to Jamaal Williams in this offense. The latter was good for 20 carries and a couple of targets last week and on the season his nine total Red Zone carries rank tied for first in the league with Jonathan Taylor. Craig Reynolds could see passing down looks, but Williams should carry the bulk of the workload in this game which has the Lions as -4.5 home favorites against Seattle. The Seahawks have the 30th-ranked defense and are 21st against the run. This is a prime spot for Williams to eat.

The Steelers aren’t good, but neither are the Jets. New York ranks dead last in team defense DVOA though admittedly they are considerably worse (32nd) than they are against the run (12th). But this is about as good a matchup that the Steelers will see this season and if Harris is healthy he should dominate the usage. He’s been game-scripted out of some early affairs which is less likely to happen here. It’s risky because rostering an RB on a bad team can be rough, but he played 80% of the snaps last week with 18 (15 carries, 3 targets) touches and could be in line for more in Week 4.

If David Montgomery sits then Kahlil Herbert would become a must play. 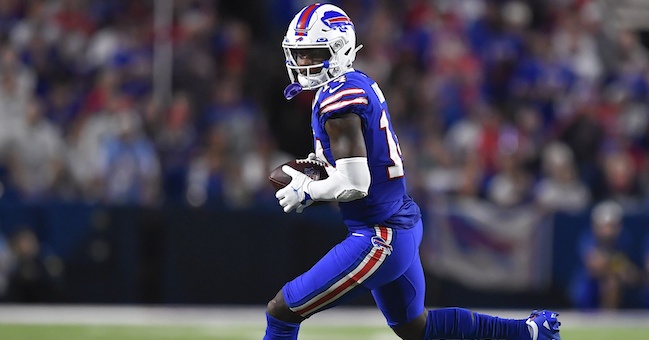 Diggs had to leave the game against Miami in Week 3 because of the heat which ended up dinging his overall. And even with that, the dude finished with 7 catches and 74 yards on 11 targets. And that was only on 70% of the snaps. He’s third in the league in red zone targets and is the overall leader in wide receiver targets through the first three games. The Ravens rank 18th in DVOA on defense and the Bills are set to put up a lot of points. While it might be tough to pay all the way up at QB, RB *and* WR, it’s also tough to fade Diggs in this game.

Though Dad Prescott hasn’t been around the last couple of weeks, and won’t be again for Week 4, it actually hasn’t slowed Lamb’s target share down all that much. He’s coming off back-to-back 11 and 12 target weeks and against the Giants went for 8 catches, 87 yards, and a touchdown. And it could have been way more seeing as how he dropped an easy 50+ yarder that likely would have ended in another score. He just hasn’t taken a hit with no Prescott and the price is really manageable here against the 29th-ranked defense in Washington. And there is some chance Zak returns this week which would likely only help CeeDee.

Curtis Samuel is currently 12th in the league in wide receiver targets, and when you count the rushing attempts (8) Washington is giving him, he has the most WR touches in the league. He isn’t breaking off huge yards, but the opportunity is tough to deny and the price hasn’t totally come up to match it. Wentz has looked his way in the red zone in each of the first three weeks as well, so there are some down and close opportunities too. With the way Washington is using him, I think he has a higher floor in cash games even against a tougher matchup in the Cowboys.

Though Zach Wilson and things could change here, Tyler Conklin ranks third among tight end targets this season. Much of that is the byproduct of the Jets having to throw a million times a game through the first three, but it’s not like their defense can stop anyone from scoring anyway. Conklin’s price just doesn’t line up with his opportunity and at this position we really don’t have that many spend-up options.

Hockenson hasn’t totally lived up to expectations yet this season with Amon-Ra St. Brown working at Goff’s number one target and DJ Chark getting decent target share as well. But that’s meant a price drop on a guy still averaging six targets per game and in one of the most high-powered offenses around. I like grabbing him here against Seattle and some of D’Andre Swift’s missing targets could land here.

The Giants’ offense line looked like a total sieve last week against the Cowboys and Daniel Jones was just running for his life seemingly on every single play. The Giants have given up the third-most sacks to opponents this season which should helped Chicago who’ve had some trouble getting after the QB. That is a bit skewed though because the first game of the season was all on the ground for both teams.

While the Falcons have seen fit to put up some points this season, I’m still not minding the Cleveland defense this week. They will presumably keep ATL off the field with the run game, something the Falcons’ opponents really weren’t able to do in the first three weeks. No Myles Garrett could hurt here though.