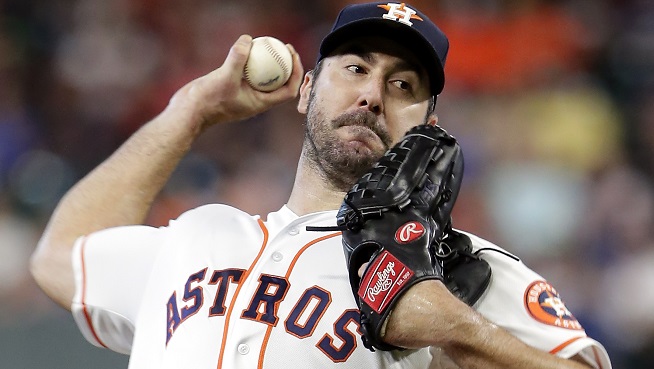 Next Wednesday is the final day of the regular season. It's been a fantastic run up to this point, and it's been awesome grinding DFS every day. That can be the most grueling aspect for many DFS players, but it helps give you an edge that can't be valued. It's also fun to watch these clubs battle for the few playoff spots remaining, and it makes many of these matchups competitive. With that in mind, let's start with the AL Cy Young favorite.

It's crazy to see a 40-year-old post a season like this after missing the last two years. It was always apparent that this would be a first-ballot Hall-of-Famer but to have a 1.82 ERA and 0.84 WHIP after missing two years is ridiculous. His consistency has been colossal, scoring at least 27 FanDuel points in 24 of his 26 starts this year. That's the All-Star we've become accustomed to, and he should have no issues with Arizona. The Diamondbacks sit 24th in OBP, 23rd in OPS, and 25th in xwOBA. All of that has JV entering this matchup as a -200 favorite, with the D'Backs projected for fewer than three runs.

Carrasco was a huge disappointment on Tuesday, but we're going right back to the well with a Mets pitcher at home against Miami. That's a recipe that should work more often than not, and we believe Taijuan will provide some elite value. The right-hander has allowed four runs or fewer in 25 of his 27 starts, totaling a 2.77 ERA and 1.10 WHIP in those outings. The two duds were against the Phillies and Braves, so facing Miami should keep the prior trend churning. Over his last six starts against the Marlins dating back to last season, Walker has a 2.42 ERA and 0.93 WHIP. He also enters this matchup as a -190 favorite in a game with a seven-run total.

George Kirby (FD $9200 DK $8400) is one of the best pitchers in the AL, and he should post another quality start against a 23rd-ranked Rangers offense.

Olson hasn't quite lived up to the expectations Freddie Freeman left behind, but this is still one of the best hitters in the NL. He displayed that with a three-run bomb on Monday, giving him a .345 OBP, .497 SLG, and .842 OPS since the start of last season. This year has not been as kind, but he's still batting third in one of the most dangerous lineups in the sport. It'll be tough for Josiah Gray to navigate them, with the righty registering a 5.17 ERA and 1.39 WHIP. He's also surrendered the most dingers in MLB, and Olson is the best bet on this club to homer behind his sensational splits. Olson has a .262 ISO, .513 SLG, and .860 OPS against right-handers throughout his career.

Mountcastle came up as one of the top prospects in this blossoming organization, and it looks like he'll be in the middle of their lineup for years to come. He's been around for three seasons now, providing a .261 AVG, .461 SLG, and .777 OPS. That's really all you can ask for from a youngster like this, especially since he comes into this matchup mashing. Mountcastle has maintained a .455 AVG, .538 OBP, and 1.129 OPS across his last six games. The best part is that he has the platoon advantage against a soft-tossing senior with a 4.65 ERA and 1.34 WHIP.

Adley Rutschman (FD $3100 DK $4800) has all the same advantages as Mountcastle and makes for a contrarian two-man stack.

The Yankees offense has been inconsistent all season, but they seem to flow when Torres is feeling it. That appears to be the case right now, with Gleyber generating a .355 AVG, .432 OBP, .658 SLG, and 1.090 OPS across his last 19 games. We've been waiting to see that stud for years now, and it's earned him the three-hole in this dangerous lineup. Aaron Judge is getting walked every at-bat, so Gleyber has more RBI opportunities than anyone right now. Mitch White is far from a menacing matchup, amassing a 9.82 ERA and 1.77 WHIP across his last five starts. That has the Bronx Bombers as one of the highest-projected lineups on this card!

This Angels lineup is straight garbage, but Trout, Ohtani, and Rengifo hold things together at the top of it. Batting leadoff is enormous for anyone's value, but it's massive when you have Trout and Shohei protecting you. That has led to Rengifo's best stretch of his career, collecting a .296 AVG, .537 SLG, and .847 OPS across his last 12 games. He's the best piece to an Angels stack because he's a heck of a pairing with those two superstars we mentioned above. This stack will also be among the most profitable on the slate, with Adrian Martinez accruing a 6.10 ERA and 1.52 WHIP in his rookie season.

The Orioles are growing something special with all of these talented youngsters, and Henderson might be their best player in years to come. The rookie was unstoppable at the minors, tallying a .298 AVG, .402 OBP, .535 SLG, and .936 OPS since his promotion to A-Ball last season. He rapidly flew up the prospect chain, collecting 36 doubles, 27 homers, 127 RBI, 27 steals, and 135 runs in those 152 games. That's essentially the guy we've seen since his call-up, compiling a .281 AVG, .354 OBP, .506 SLG, and .860 OPS through his first 25 games. All of that makes this pricing egregious, and you better believe he'll be $1,000 more on both sites this time next season.

The debut season in Detroit has not been kind for Baez, but he continues to hit in the heart of this lineup every day. He's actually productive when he faces left-handers, accumulating a .350 OBP, .536 SLG, and .916 OPS against them since the start of last season. Those are All-Star averages, and we all know this guy can play like an All-Star in any given game. It seems way more likely since he faces Daniel Lynch, with the southpaw sporting a 5.06 ERA and 1.58 WHIP. Not many people will use Baez with his horrific season, but this price is way too low behind splits like those.

I was staring at third base for about 10 minutes before deciding on two players, but then I just decided to go with the most reliable option at the position. That's Riley, picking up 70 homers and 199 RBI since the start of last season. We actually thought his 2021 was his breakout, but he's proving otherwise with 37 bombs this year. That always has him hitting in the heart of this bludgeoning Braves lineup, who are projected for five runs in this spot. We discussed how Gray has surrendered the most ding-dongs in the sport, and the Riley-Olson combo should add to that total.

We paid up for Riley, so let's get a cheap option for our other third baseman. Bohm looks like the best value at the position, batting fourth and fifth for most of the second half. It's easy to see why he earned that promotion, providing a .320 AVG, .466 SLG, and .818 OPS across his last 74 games. Those are incredible averages from a player in this price range, particularly with the Phillies posting one of the best lineups around. We don't anticipate Hayden Wesneski to slow them down, making just the fifth start of his career. He's actually faced four of the worst offenses in baseball (PIT, COL, SF, CIN), but good luck navigating this one.

Martinez might be the worst pitcher on this slate. We already discussed how he has an ERA north of 6.00, and Shohei is the best option in the offense from the left side. The pitcher/hitter has been crushing right-handers throughout his career, collecting a .364 OBP, .556 SLG, and .920 OPS against them. He's also got almost all of his steals as well, and it's simply impossible to fade him against a guy like Martinez. Shohei has been smashing recently, too, registering a .325 AVG, .394 OBP, .631 SLG, and 1.025 OPS across his last 43 games. Don't be afraid to throw Trout in there as well!

I have not had Harris in here enough because of his crappy lineup placement, but the Braves finally made the right move. This rookie was raking in the nine-hole for months, but they finally have him batting in the top half of the order now. That's a massive boost to his value with these studs around him, and the 21-year-old is only getting better by the day. We love that since he has the platoon advantage against a gas can like Gray, totaling a .330 AVG, .371 OBP, .601 SLG, and .872 OPS against right-handers this season. Good luck finding that from many players in this price range.

This is one of the riskiest options in this article, but there's a ton in Yaz's favor here. His biggest asset is a matchup with Jose Urena. The Rockies righty has been one of the worst arms in baseball, accruing a 6.59 ERA and 1.85 WHIP across his last six starts. Those horrific averages have San Fran as one of the sneakiest stacks of the day, with Yastrzemski expected to bat in the heart of their lineup. He'll definitely be right there, with Yaz generating a .296 AVG, .704 SLG, and 1.037 OPS across his last seven games. Most of that damage happened against this terrible pitching staff, and we have to bet against the Rockies for the rest of the season.