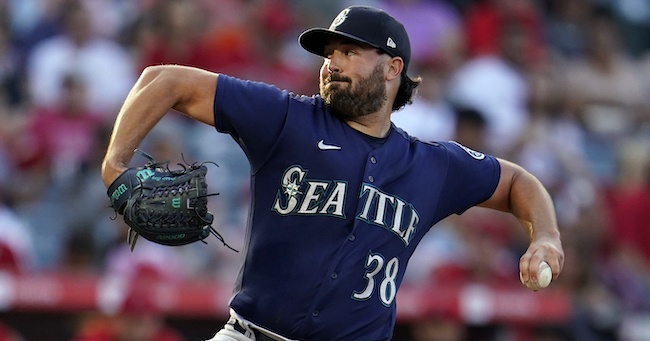 It saddens me to say this, but this is the final Sunday of the regular season. We have just three days remaining after today, and it's sad to see the everyday grind of baseball disappear. This might be an unpopular opinion, but I prefer regular season sports to playoffs when it comes to DFS. We get more games and more dynamics to discuss, and the familiarity of it always keeps me interested. I'm obviously excited for the postseason, but I'll miss the grind of every team playing every day. I might eat my words when we look at lineups, though, because teams will do wacky things on this final Sunday of the regular season.

I have to admit that Ray's 2021 Cy Young campaign was one of the flukiest awards I've seen in sports, but this guy can still be a stud. The left-hander has been particularly good as of late, tallying a 2.72 ERA, 1.07 WHIP, and 10.5 K/9 rate since June 5. That's the ace we saw throughout most of last season, and we absolutely adore a matchup with the A's. Oakland ranks bottom-three in runs scored, OBP, OPS, wOBA, and xwOBA. That's on full display when you see that Ray has a 1.82 ERA, 1.05 WHIP, and 12.8 K/9 rate in their four matchups this year. All of that has him and Seattle entering this sensational matchup as a -300 favorite!

The pitching selections on this slate aren't anything special, but these two aces are. Bieber is having a bounce-back season for the Guardians, generating a 2.91 ERA and 1.03 WHIP on the year. His recent form is just as ridiculous, registering a 2.66 ERA, 0.99 WHIP, and 9.2 K.9 rate since May 14. That sort of form makes him enticing against anyone, but Kansas City is one of the best matchups in the sport. They currently rank 24th in runs scored, 21st in OPS, and 26th in xwOBA. He's faced KC twice this season, totaling a 0.71 ERA and 0.55 WHIP against them.

Tyler Anderson (FD $8600 DK $8200) gets a revenge game against the Rockies as a -250 favorite. That's scary since Colorado has the fewest road runs in baseball, making Anderson one of the best value plays of the day.

Hoskins just connected on his 30th homer earlier in the weekend, and he's doing everything possible to keep this Phillies team in the playoff hunt. The slugging first baseman has a .355 OBP and .861 OPS since May 31. That's the player we've seen for a few years now, and he's even more enticing with the platoon advantage in his favor. Since 2020, Hoskins has a .399 OBP, .595 SLG, and .994 OPS against left-handed pitching. This happens to be one of the worst pitchers in baseball too, and we'll dive into that later on. In 37 at-bats opposing Corbin, Hoskins has a .405 OBP, .818 SLG, and 1.223 OPS.

This is a total punt play, but I was amazed to see how cheap Santana is. He certainly earned it with his terrible play, but the former All-Star is starting to get hot. In fact, Santana has seven homers over his last 20 games, sporting a .534 SLG and .809 OPS in that span. That's all you can ask for from such a cheap player, and he should continue to bat fourth or fifth for this sneaky Seattle lineup. He's also a switch-hitter who's been better against righties at times throughout his career, which is stellar news since he faces a righty with a 4.43 ERA and 1.38 WHIP.

J.T. Realmuto (FD $3400 DK $5900) is the best option at catcher. He gets the platoon advantage against Corbin and has been a Top-20 overall player over the last two months.

Semien has been in this article for months, and it's easy to understand why. After doing nothing through the first month, Semien has nearly 30 homers, and 25 steals since then. That's the superstar who totaled 45 homers and 15 steals last season, clearly reestablishing himself as the most important player in this lineup. That's big news since Semien faces a southpaw here, with Marcus maintaining a .337 OBP and .775 OPS against lefties this year. This is one of the worst lefties around, and we'll dive into Tucker Davidson's disastrous averages later in the article!

This has been one of the worst offenses outside of Mike Trout and Shohei Ohtani, but they've definitely found something with Rengifo. The breakout second baseman has been leading off since the All-Star break, accumulating a .282 AVG, .504 SLG, and .808 OPS across his last 31 games. That looks even better since he's homered in two of his last three games, making him about $500 too cheap on both DFS sites. We're certainly not concerned about him facing a rookie like Tyler Miller, who's got an 8.10 ERA and 1.80 WHIP in limited time this season.

Everyone assumed that the Mets stole Francisco Lindor in that trade two seasons ago, but it's not looking like that's the case. Rosario and Andres Gimenez have been brilliant up the middle for this team, with Rosario hitting second every day. He's earned that role with his improved bat, boasting a .296 AVG and .786 OPS across his last 22 games. That's not far off of his season averages, and it doesn't even consider his elite speed. It's not like Max Castillo will scare us away, collecting an 8.44 ERA and 2.09 WHIP at Triple-A before posting a 4.98 ERA in a limited time at this level.

Why is Correa still sitting around $3K on FanDuel? That simply makes no sense because this dude has been performing like an All-Star since the break. The former Stros shortstop has a .348 AVG, .412 OBP, .580 SLG, and .991 OPS across his last 34 games. That's one of the best stretches of this guy's career, and it's clear he's starting to get comfortable in a Minnesota uniform. He should feel even comfier in this matchup, facing a lefty who's only pitched 28 innings at this level. Carlos has clobbered lefties, too, compiling a .395 OBP and .933 OPS against them this year.

We had to pay up at pitcher, so we'll keep the value bats rolling in. Jung is actually one of the best values on the slate, looking like a star in the making. The slugging third baseman hit two homers earlier in the week, generating a .311 AVG, .381 OBP, .538 SLG, and .919 OPS at the minor league level. He's shown glimpses of that here, particularly with the platoon advantage in his favor. In 35 at-bats against southpaws this season, Jung has a .265 AVG, .588 SLG, and .874 OPS. Davidson is probably the worst pitcher on this slate, too, accruing a 6.80 ERA and 1.70 WHIP.

Shohei is the best player in baseball, and no one can change my mind. This dude is literally a Top-10 pitcher and a Top-20 hitter in this league. We'll ride him at the plate here, providing a .323 AVG, .372 OBP, .591 SLG, and .923 OPS across his last 33 games. A stretch like that makes him intriguing against anyone, but Miller's 8.10 ERA and 1.80 WHIP make him one of the best options on the board. Shohei has been slaughtering right-handers throughout his career, too, picking up almost all of his steals against them while attaining a .369 OBP, .544 SLG, and .914 OPS opposing them.

Joc can get on people's nerves with his strange antics, but this guy has always proven to be a great hitter. That's why San Fran has chosen to bat him leadoff, tallying a .464 AVG, .531 OBP, .821 SLG, and 1.323 OPS across his last eight games. We've seen him go on tears like that before, and it should continue against a soft-tosser like Zach Davies. The splits for Joc are superb, too, with Pederson posting a .280 AVG, .358 OBP, and .902 OPS against righties this season.

Let's cap off our Phillies stack with the best value of the bunch. We already discussed how poor Patrick Corbin has been, ranked at the bottom of almost every season-long statistic. That has the Phils as one of the highest-projected lineups on the board, and Castellanos should fill right in the heart of it. This All-Star has a .289 AVG, .488 SLG, and .823 OPS since the start of last season. He got off to a terrible start this year, but a .328 AVG and .834 OPS across his last 36 games have us encouraged. Not to mention, Castellanos is just shy of a .900 OPS against left-handers in that two-year span.