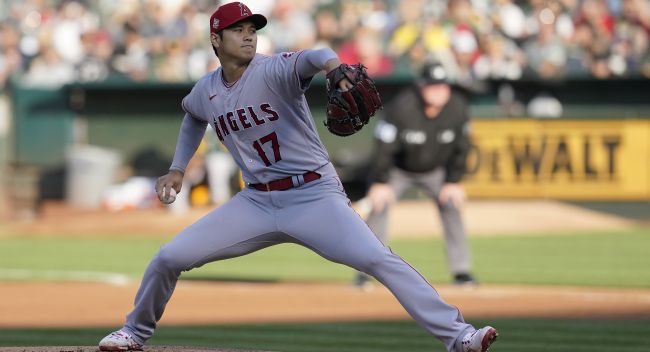 I can't believe we're here. This is the final day of the regular season! That makes me sad because it's always bizarre to have your baseball routine taken away. In any case, it's been a fun year, and we still have playoffs ahead of us. This particular card could be frustrating, though. Every single team has things decided, and it could get ugly in terms of pitching. Many of these guys will be held back, and many hitters will be kept out of the lineups as well. We're going to do our best to project how it will shape out but be wary of this final slate! Also, we'd like to thank you for reading throughout the year!

It's unclear how long Shohei will pitch here, but he's easily the best option on the board. The two-way player has a 2.35 ERA and 1.03 WHIP this year, pitching even better in the second half. In fact, Ohtani has a 1.66 ERA, 0.98 WHIP, and 11.7 K/9 rate since the first week of June. He's obliterated Oakland all year, too, obtaining a 0.92 ERA and 0.92 WHIP in their three meetings. That's no surprise since the A's rank bottom-three in runs scored, OBP, OPS, wOBA, and xwOBA. In addition, LA enters this matchup as a -250 favorite, with Oakland projected for only three runs.

We have no clue how long any pitcher on this slate will last, but Houston says they're going to play their guys out. That's one of the only teams that we know of that's said that, and it makes Valdez an advantageous choice. The left-hander has actually been struggling as of late, but you know the Stros want to get him rolling heading into the postseason. Before his two most recent duds, Valdez set an MLB record with 25 straight quality starts. He also had a 2.41 ERA, 1.06 WHIP, and 8.6 K/8 rate in that sensational stretch. We also don't mind that he could face a B-squad Phillies lineup, putting up just three hits and no runs on Tuesday. Not to mention, he's a -180 favorite in this matchup.

France has really struggled over the last few months, but this price has dropped way too far. This dude has quietly been one of the most consistent hitters over the last three years, tallying a .285 AVG, .355 OBP, .445 SLG, and .800 OPS in that span. Not many players are posting averages like those, especially in this price range. Getting the platoon advantage against Tyler Alexander is the best part of this, though, with Ty totaling a .848 OPS against lefties since the start of last year. Alexander is atrocious, too, amassing a 4.72 ERA and 1.31 WHIP.

This FanDuel price is ridiculous. Naylor has been one of the team leaders for the Guardians, regularly batting cleanup behind Jose Ramirez. That would give anyone some great pitches, and Naylor has done damage in that role. In fact, Josh has a .281 AVG, .519 SLG, and .850 OPS with the platoon advantage in his favor. You can't ask for any more from such a cheap player, especially since Naylor has a .375 OBP, .585 SLG, and .960 OPS across his last 11 games. Heasley is a righty he can rock, registering a 5.00 ERA and 1.45 WHIP.

The Rockies are having a bullpen game. As someone who lives in Colorado and has watched 20 years of Rockies baseball, I can tell you that's not going to go well. It's unclear if the Dodgers will even send out their starters, but every indication is that they will. That makes Muncy an enticing option, maintaining a .361 OBP, .511 SLG, and .872 OPS across his last 52 games. That's the stud we've seen since he joined the Dodgers, and it makes it hard to understand how his average is below .200. Muncy has always mashed against Colorado, too, collecting a .368 OBP, .573 SLG, and .941 OPS in nearly 300 at-bats against them.

This is another FanDuel price that has me flabbergasted. Rengifo has been a revelation for the Angels, earning the leadoff spot ahead of Mike Trout and Shohei Ohtani. That alone gives Rengifo some fantastic opportunities, and he's been rewarding his manager with some pristine play. Over his last 18 games, Luis has a .256 AVG, .500 SLG, and .784 OPS. Those are incredible numbers from such a cheap player, and we love that he's got the platoon advantage against a rookie pitcher with a 6.18 ERA and 1.37 WHIP. Against left-handers this year, Rengifo has a .323 AVG, .589 SLG, and .936 OPS.

Franco has been a disappointment for most season-long fantasy managers, but this kid will be a stud. This 21-year-old posted record-breaking numbers in the minors and has a .283 AVG and .776 OPS through 152 games at this level. That's genuinely absurd from such a young kid, and we believe he'll be $500 more on each site this time next year. He's starting to show flashes of the player he could become, accumulating a .364 AVG, .451 OBP, .614 SLG, and 1.065 OPS across his last 12 games. It's not like Nick Pivetta is a pitiful matchup either, providing a 4.56 ERA and 1.37 WHIP.

It has not been the debut season Baez was hoping for in Detroit, but he continues to bat third in this lineup every day. That lineup spot is an excellent start to his value, but the variable we love is his sensational splits. The former All-Star has a .301 AVG, .511 SLG, and .838 OPS against southpaws this season. That's scary when looking at his recent form, scoring at least 13 FanDuel points in three of his last five games. A matchup with Marco Gonzales is great, too, because Baez's only weakness is his swing-and-miss stuff. Gonzales has one of the worst K rates in baseball, and it should allow Javy to get the ball in play a few times.

The Mariners have been one of the biggest surprises in baseball, and Suarez is a significant reason why. This guy actually leads MLB in home runs since 2017 and has been scorching since the All-Star break. Over his last 47 games, Suarez is sporting a .337 OBP, .557 SLG, and .897 OPS. Those power numbers are some of the best around, and it consistently earns him the three-hole in this lineup. His splits have also been superb, producing a .383 OBP, .556 SLG, and .938 OPS against them this year. That certainly won't sit well with a terrible pitcher like Tyler Alexander.

We briefly discussed how the Rockies bullpen could be the best matchup on this slate, so let's dive in there. Colorado already ranks dead-last in ERA and WHIP, and the bullpen has followed suit. Their bullpen ranks dead-last with a 4.82 ERA, and it would be well above 5.00 if Daniel Bard didn't have a historic season as their closer. That's tremendous news for someone as hot as Turner, tallying a .356 AVG, .427 OBP, .563 SLG, and .989 OPS across his last 58 games. He also just returned to action on Tuesday from a nagging injury, and something tells me LA wants to get him some at-bats to get back on track.

Let's cap off our Dodgers stack with their leadoff hitter. That's MVP Mookie, who's amid another amazing season. The perennial All-Star has 40 doubles, 35 homers, 116 runs, and 82 RBI in a stat-stuffing season. That's no surprise since he leads off for the best lineup in baseball, ranked Top-10 in fantasy points as well. As long as he's atop the highest-projected lineup on this slate, Betts is one of the best bets on the board. If the Dodgers choose to rest their regulars, don't forget about boppers like Cody Bellinger, Trayce Thompson, and Joey Gallo potentially filling in.

The bottom half of the Angels' order is one of the worst in baseball, but this top half has been impressive all year. Ward has been their biggest surprise, amassing a .285 AVG, .365 OBP, .480 SLG, and .845 OPS. A ton of that damage has happened recently, with Ward accruing a .385 AVG, .434 OBP, .656 SLG, and 1.090 OPS across his last 26 games. That makes these price tags laughable, especially since Ward gets the platoon advantage against this rubbish rookie. We don't imagine Mike Trout playing, but if he does, the Ward-Trout-Rengifo stack is one of the best on the slate.

Out of all the lousy pricing on this slate, this BDLC pricing is egregious. This youngster has been mashing in the heart of the Marlins lineup, compiling a .390 AVG, .753 SLG, and 1.157 OPS across his last 22 games. You usually see a $5,000 price tag when a player posts averages like those, and it's clear these DFS sites are simply not paying attention to the Marlins. That's no surprise since no one does, but we'll take advantage. Atlanta does have one of the scariest rotations in baseball, but they'll likely send out some minor leaguers in this meaningless game.