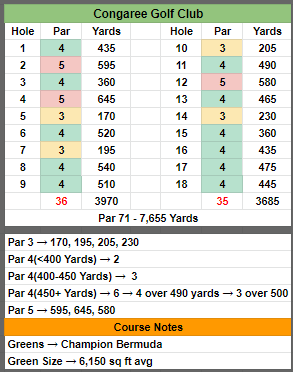 Welcome back golf fans. If you went full Keegan last week, you came away happy as he picked up his 5th career win and first since the BMW Championship back in 2018. It was a classic case of a very good ball striker putting together a terrific putting week and finding his way to the hardware on Sunday afternoon.

This week the PGA Tour returns back to the United States for the CJ Cup in South Carolina. This is an event that started back in the 2017-18 season at the Club @ Nine Bridges in South Korea and was played there for three straight seasons. For the last two years, it has been played at two separate Las Vegas courses in Shadow Creek and the Summit Club and will now be played a fourth different course, this time moving to Congaree Golf Club in South Carolina. This will also be the second time Congaree will be used on the PGA Tour with the 2020-21 Palmetto Championship played at the course. The only difference this time around is that the CJ Cup is a small-field, no-cut event while the Palmetto Championship was a full-field Top 65 and ties event. Either way, there are players in the field who have played the course in a PGA Tour-sanctioned event. This week's field is much better than last week's as six of the World's Top 10 golfers are in the field led by #1 Scottie Scheffler.

The course is lengthy Par 71 listed at 7,655 yards on the scorecard and ranked as the 7th toughest course(outside majors & the Players) for the Palmetto during the 2020-21 season. One of the Par 3's is listed at 230 yards and six of the Par 4's are listed at over 450 yards with four of them over 490 yards. The greens are Champion Bermuda grass and average size(6,150 sq ft) compared to other PGA Tour courses. With that in mind, let's take a look at some top stats I am targeting in my model.

Strokes Gained: Off the Tee

We only have a one-event sample size at this course but when looking at the strokes gained stats it is ball striking that led the way to the top of the leaderboard. Both SG: Off the Tee and SG: Approach had more correlation to winning than SG: Around the Green and SG: Putting.

Off the tee, golfers have some fairly generous fairways to hit when compared to tour average but it is clear that you don't want to miss as there is little rough and lots of native areas with tons of sand. Want proof? Check out this video from the 2021 Palmetto Championship. In the end, the driving accuracy numbers were much higher than the tour average so the off the tee stat I will concentrate on the most is Driving Distance as the Top 25 golfers averaged over 317 yards off the tee(312 for those who made the cut).

With this being a Par 71 with only three Par 5's, Par 4 scoring automatically gets a boost in my model. Again, it's only a one-event sample size but Par 4 scoring had almost double the correlation to success as par 5 scoring with the longer Par 4's standing out even more.

With all of that, let's now dig into my top targets for the week and then don't forget to grab your copy of my cheatsheet with all my top picks for DraftKings and FanDuel along with my top 15 ranks in my player pool.

We have an absolutely loaded field this week with a lot of elite players making their 2022-23 season debuts. I will be building around the top 2 in pricing for a couple of reasons starting with the fact they have been much more active playing on the DP World Tour over the last month. I will have almost split exposure to Rory and Rahm here but will start off by talking about Rahm who is coming off a win at the Open de Espana and a T2 at the BMW PGA Championship. While he was only slightly above average with the irons(+.37 and +.97 SG: APP) he rode a red-hot driver(ranked 1st and 3rd in SG: OTT) and putter(10th and 3rd in SG: Putting) which should translate to success here at Congaree. Rahm leads our projections this week and is a great play in all formats.

Pairing Rahm with another $10K+ player is going to be challenging so I am going to drop down to one of my favorite PTS/$ plays in the field with Max Homa. He comes in with great form winning the Fortinet Championship to open the season and has five Top 25 finishes in his last six PGA Tour events but that isn't what stands out the most. Looking at the stats, he is one of the most balanced players on Tour ranking up there in almost every single category. He is both accurate(15th in Driv Acc) and long(18th in Driv Dist) off the tee, ranks 15th in SG: Ball Striking and 8th when looking at Proximity from 200+ yards, and combines all that being well above average around the green(19th in SG: AG) with the putter(13th in SG: Putting). He is one of our top PTS/$ plays in the upper half of the field and a great play in all formats.

I am going to continue to load up on the exciting rookie in DFS until someone makes me stop! He comes in with Top 15 finishes in each of his first three PGA Tour events and may be the best putter on tour gaining five or more strokes in each of those events. While he lost five strokes on approach at the Shriners, he is still tour average from 175-200 yards and well above-average from 200+ yards which is an area that will be crucial at the longer Congaree Golf Club this week. What I like best here is that he is now at a season-low price tag on DraftKings making it easy to pair with Rahm and Homa or whatever two top-tier plays you are going with. I will have exposure in all formats.

Stars and scrubs is a great way to build lineups on a top-heavy event and making it much easier is the amount of value we get this week. My favorite value is easily S.H. Kim who is second to only Taylor Montgomery in the 2022-23 rookie rankings after a terrific start to the season. He has gotten better each week with a T36 at the Fortinet, T13 at the Sanderson Farms, and a T4 at the Shriners and has also gained strokes in every Strokes Gained category in each of the last two events. With four rounds from every golfer in a no-cut event, we are going to want birdies and Kim is currently third on Tour in birdie average and birdie or better %. Lock and load in all formats.

The above three players are likely chalk this week so I want to mix in some lower-owned plays to help separate my lineups and Seamus Power should do just that coming off a missed cut at the Shriners after seeing double-digit ownership. We don't have to worry about missing cuts this week and what I like best about Power is that he makes a ton of birdies ranking 8th in birdie average this season and was 38th last season. To top it off, he has experience here at this course finishing T19 at the Palmetto Championship in 2021. Power checks a lot of boxes and is one of my favorite value plays this week.