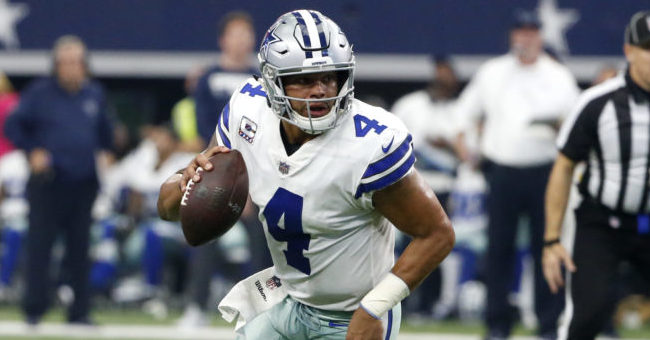 Welcome back football fans. Week four in the NFL is here and DFSR has you covered. Earlier in the week, we look at our top cash game picks and now it's time to look at some stacks that help us get to the top of or GPP contests. Let's get started.

The Bills will be the center of discussion on this slate with a game total(54) which is 9.5 points higher than the Giants and Cowboys game. This will be the second time in five days for the Bills playing here in Detroit, this time against the 25th-ranked Lions' defense that has given up an average of 421.5 yards per game over their last four. Josh Allen may be on a mini-slump throwing the ball while he plays through an injury but has made up for it with his legs rushing for 80+ yards in two of his last three. The price has also come down to its third lowest point of the season and whether that's slate relative or not, it makes it easier to build around the highest floor and ceiling QB on the slate.

Things get interesting after Allen as you probably don't wanna touch Kirk Cousins against the #1 pass defense and Mac Jones doesn't really have a lot to offer either. THis brings us to the Cowboys and Giants game where I think both quarterbacks are viable and will be in my player pool on Thanksgiving.

I lean towards Dak if choosing between them and it really comes down to consistency. Since an uninspiring return in Week 7, Dak has thrown for 250 or more yards with multiple touchdowns and 20+ fantasy point efforts in three straight games against NFC North opponents. The Cowboys utilized the run game in their first meeting with the Giants with Cooper Rush under center but I love the weapons Dak has around him here and the price differential allows us to build a more balanced lineup. I will have a ton of exposure to Dak in all formats.

Also Consider: Daniel Jones(NYG) who is coming off a great game against the Lions and had success against the Cowboys on the ground(9-79) in their first meeting.

Not only are both quarterbacks in play in this game, but both running backs are also as they are both game script independent and both correlate with their quarterbacks as excellent pass catchers. Let's start with Saquon Barkley who was in the MVP conversation before his huge dud last week in a smash spot. The good news is that the price is down nearly $1000 on both sites for a player who is commanding some elite usage and is second to only Derrick Henry in rushes(21.3), rushing yards(95.3), and touches(24.4) per game. The Cowboys' defense has been breached through the rush as well so look for the Giants to give Saquon another heavy workload as they look to upset the Cowboys on the road.

On the other side, we have Tony Pollard who has been trending up in a big way lately. He went off when Zeke sat out in week 8 and in week 10 rushing for 131 and 115 yards and even when Zeke returned last week, he still touched the ball 21 times and tallied a monster fantasy day with nearly 40 points. Zeke is questionable on this short week so stay tuned for news as Pollard would easily become our top running back and a top overall play of Zeke sat out. Either way, I will have exposure to Pollard and his explosiveness on Thanksgiving.

There are multiple ways to attack this Bills/Lions game and one way is through the run game on both sides of the ball. It is a bit more muddy on the Lions side so let's talk about Singletary who is red-hot right now coming off 20 touches against the Browns and with three touchdowns in his last two games, has 17 or more DraftKings points in each. He now faces the a Lions team that ranks 27th in DVOA against the rush and 23rd in fantasy points to running backs. As a huge favorite in a game with the highest total on the slate, Singletary is one of our top plays on the slate.

Also Consider: Rhamondre Stevenson/Damian Harris(NE) against a Vikings defense that has given up an average of 154 rushing yards over their last three games

Looking at the pricing at wide receiver this week, Jefferson and Diggs are in a class of their own and while their projections are very close, it's Diggs that gets the nod for me this week. First of all, we have seen Jefferson get shut down twice this year and the Patriots are 3rd in fantasy points to wideouts and no one knows how to eliminate a team's best player like Bill Belichick. That brings us to Diggs who has been incredibly consistent all season and in all game scripts. He has tallied 14 or more DraftKings points in nine of 10 games and also has monster upside with 25 or more DraftKings points in six of those games. A majority of that upside comes from the big plays as he is 6th in catches over 20 yards and is one of just two players with five or more catches of 40 or more yards. He now faces a Lions team that has allowed the third-most yards on deep balls. Fire up Diggs in all formats.

Even with a sizeable drop-off in game total, I think there is just as much if not more ownership in this game and it comes down to the price on this smaller slate. While Lamb hasn't quite been on the same level as Jefferson and Diggs, he has been very consistent and comes at a huge discount. Before the dud last week(blame it on MIN for not keeping up), Lamb had tallied double-digit DraftKings points in eight straight and finally showed us his ceiling against the Packers with 150 receiving yards and two touchdowns. What I like most here is the matchup which is a bit deceiving as the Giants rank 24th in DVOA against the pass but sit 5th in fantasy points to wideouts mainly because of the lack of touchdowns allowed(4th fewest). Digging deeper, however, Lamb easily gets the best matchup in this game in the slot going up against Darnay Holmes who ranks as one of the worst slot corners in the league. All things considered, Lamb is my top PTS/$ play at the position.

The Patriots don't throw the ball a whole lot but get a great matchup on Thanksgiving which most definitely brings Jakobi Meyers into play. The Vikings' defense may rank 20th in DVOA against the pass but has given up 297 or more passing yards in four of their last five games and like Lamb, Meyers easily gets the best matchup in the slot as the Vikings have given up the 6th most yards down the middle of the field. This gives him a nice floor which he has provided consistently all season long with 50 or more receiving yards and double-digit DraftKings points in six of eight games. At these prices, I will have exposure to Meyers in all formats.

Also Consider: Gabe Davis(BUF) as a cheaper option to pair with Josh Allen and one with big upside with a 16.2 aDOT and 10 catches of 20+ yards on the season or Isaiah Hodgins(NYG) as a punt play who is taking over as the #2 passing option with Wan'Dale Robinson on the IR. He caught all three of his targets last week and out-snapped(45-33) and targeted(3-2) Kenny Golladay

The tight end position gives us a lot of options on Thanksgiving and I hope that with the price leaves Hockensson a bit lower owned. I mentioned earlier the fact the Patriots love shutting down the other team's top weapon and that could mean another down week from Justin Jefferson but definitely opens up others. While we haven't seen the ceiling game like he flashed with the Lions earlier this season, it is clear the Vikings want Hockenson heavily involved in the game plan as he has seen nine or more targets in all three games since the trade. It also helps that this is one of the Patriots' weaknesses on defense as they rank 25th in fantasy points allowed to tight end. I will have a pretty even spread on the tight end position but Hockenson is definitely my favorite.

One of the reasons I think Hockenson will be lower owned on DraftKings is the value with Schultz and Knox in the mid $3K range and I will probably be pretty split on these two options as they are interchangeable if building multiple lineups. If choosing just one, it's Knox who gets the better matchup facing a terrible Lions defense that ranks 23rd in DVOA against the pass and has allowed the 3rd most fantasy points to the tight end position. With Allen dealing with an elbow injury, Knox has also seen an uptick in usage with 13 targets over the last two weeks. He is my top value tight end and one of my top values overall on this slate.