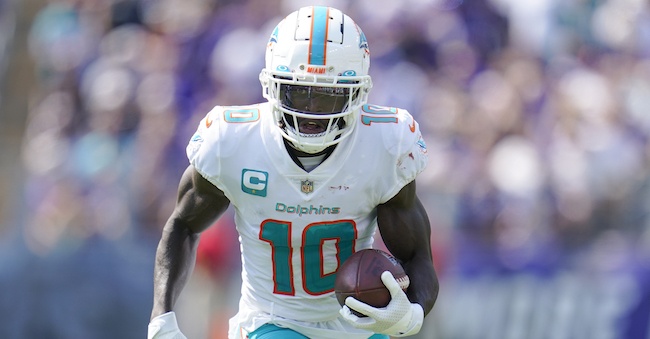 While Lamar Jackson has been relatively disappointing over the last couple of weeks, I still think we can go back to him in cash on FanDuel on this slate. The passing efficiency has not been there, but he’s still running 10+ times a game which is going to give him about as high a floor a quarterback can have these days. The Jaguars rank 26th in DVOA defense on the season and 31st against the pass. This could be a smash spot for Jackson who should see plenty of volume and has been running a bit bad on the touchdowns (both running and throwing) over the last few games.

With Thanksgiving week reducing the number of games we have on the main slate, we are going to have to take value where it comes. Geno Smith is in an excellent spot here coming off a bye and facing one of the worst defenses in football. The Raiders rank 32nd overall in defensive DVOA and also dead-last against the pass. That’s a good starting point for Geno who has 2+ touchdown passes in eight of his ten games this season and a 17:4 TD:INT rate on the season. He’s also gotten out in the run game as well, maintaining a high fantasy floor throughout. The DraftKings price is way too low here for the floor and upside and I think he could be a popular start there.

Mike Williams could miss this game and we already know that Ekeler is featured so prominently in the passing game that his floor in full PPR is just so high. He ranks 10th overall in targets on the season, a crazy stat for a running back and is lapping the field at the position in terms of passing down work. His 206 total touches are fifth in the NFL as well and the volume here should give him a very high floor against a Cardinals team ranked in the bottom third of the league against both the run and the pass. There’s a reason this game has a high total and Ekeler should be featured heavily.

In terms of price, Kenneth Walker is coming as RB8 on DraftKings which is going to work out in our favor on this slate. The great news for Walker was that in Week 10, before the bye, the Seahawks were in a negative game script against the Bucs and the dude still played 87% of the snaps and eight targets in the passing game. If he’s just an elite workhorse guy, and by the skillset, he is, then we are getting him at bargain pricing on DK especially. The Seahawks are -3.5 home favorites in a game that has the highest total on the slate. Stacking Geno Smith and Kenneth Walker on DraftKings should have a high floor.

This is an interesting spot for the Dolphins because they are huge favorites against the Texans which is usually where we want to be in cash with running backs. If Week 10 is any indication then Wilson could dominate the carries here. He played in 61% of the offensive snaps and carried the ball 17 times and also garnered five targets as well. While Raheem Mostert is still, very much in the mix, I do think the plan is to lean on Wilson going forward here especially in positive game scripts. Houston is ranked 31st against the run on the season and this lines up well for him to be running downhill most of the game.

Strongly consider Latavius Murray who appears to now be the RB1 (for whatever this is worth) for the Denver Broncos after they released Melvin Gordon and are without Chase Edmonds.

If Joe Mixon can’t go then Samaje Perine would jump to the top of the running back value list.

I’m piling these guys together here not so much as a cop-out in stacking all of the most expensive wide receivers together and calling it a day, but rather because there is a class of WR right now that is just head and shoulders about the rest of the field. And these three are among that group. For this slate, without a clear-cut running back cash option in the upper-tier and the possibility that there will be some value, I think you probably need to play two out of these three in cash if possible.

Tyreek Hill is second in DraftKings scoring among WRs this season behind only Stefan Diggs who isn’t on this slate. He’s second overall in targets and plays in one of the most dynamic offenses in the league. The concern here with him isn’t the talent it’s just that the Fins are huge favorites about the Texans and they could be in run-out-the-clock mode late in the game if things get out of hand. That being said, Hill for the most part has been such a major part of that success that he’s tough to fade here.

Meanwhile, DaVante Adams leads the league in targets this season with 112 and over the last three games, with the Raiders in desperation mode he’s seen 13, 14, and 17 looks from Derek Carr. This game has a high total and Adams should be featured almost exclusively once again in the passing attack.

And finally, Hopkins hasn’t seemed to care who the quarterback for the Cardinals is considering he had 12 targets (9/91) from Colt McCoy last week and has double-digit looks in four of the last five games. The matchup is a good one against the Chargers who rank 19th in DVOA though admittedly they are much better against the pass than the run. If looking to choose between these three, that could leave Hopkins out of the mix though he’s cheaper than the rest of the group.

This is a situation we need to monitor going into Sunday. Moore is banged up, but if he could go then he offers a very solid floor based on his use in the passing game for Arizona, almost independent of who is under center. Before the loss to the 49ers that saw him exit early, he had seen 13 and 10 targets respectively in the previous two weeks. With a full bill of health, he’d definitely be a value on both sites.

That being said, if he were to sit then I think we could fire up Greg Dortch in his place. Dortch played 93% of the Cardinals’ offensive snaps in Week 11 and saw 10 targets, turning them into 9 catches and 103 yards. We should know the injury situation here all around heading into Sunday’s games.

Tight end is such a problem position on a week-to-week basis and typically we want to go as cheap as possible and try to get out alive. That could be the case again here. Logan Thomas has been back for the last couple of weeks and last time out he played 68% of the snaps and saw six targets. For a $3K guy on DraftKings, we can live with that usage.

Everett was something of a surprise scratch on Sunday though has returned to practice this week and could be back in the mix. The Chargers pass-catching situation is getting a bit crowded with Keenan Allen back and Mike Williams possibly playing. But tight ends have torched the Cardinals this season and this could be a smash spot for Everett because the Arizona linebackers just can’t hang.

Obviously, Travis Kelce is the top overall play and it’s not close at tight end. I do think if you are choosing him then you are probably not running one of the WR1 guys listed above.