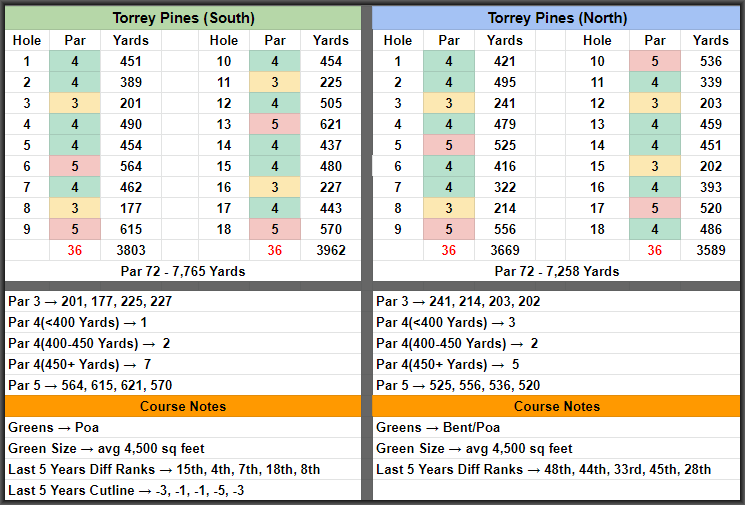 Welcome back golf fans. This week the PGA Tour stays in Cali and heads to Torrey Pines Golf Course for the 2023 Farmers Insurance Open. Like last week, we have another multi-course rotation with players playing one round on the South and North courses on Thursday and Friday before the Top 65 & ties move on to play the South Course on Saturday and Sunday. Another similarity to last week is the elite field led by five of the Top 10 and nine of the Top 25 players in the Official World Golf Rankings are teeing it up this week.

One quick note before moving into the course, stats, and picks. To not interfere with the NFL Playoffs, this week's event will be played from Wednesday to Saturday.

With three of the four rounds(for those who make the cut) played on the South course, this is where I will concentrate my research and base my stats model around this week. With the North course playing much easier(at least a stroke easier in each of the last five years and over 3.5 strokes easier last year), it will be important to focus there when constructing showdown lineups for the first two rounds.

Both courses are Par 72 setups with the biggest difference being distance as the North Course is listed at 7,258 yards while the South Course is listed at a whopping 7,765 yards. This immediately brings two things to the forefront when building models and it starts with Driving Distance which is huge in navigating the seven Par 4's that are over 450 yards and two Par 5's that stretch over 600 yards. The second thing that stands out is the importance of long-iron approach shots which has Proximity of 200+ yards very high in my model.

Other stats in my model:

With all that said, let's jump in and look at some picks that stand out when looking at course history, current form, and stats.

Hard not to kick things off with Rahm who not only checks all the boxes but is elite in every single area. It starts with the course history as he returns to Torrey Pines with finishes of 7th or better five of six trips to the Farmers Insurance Open including a win in 2017 and also took down the 2021 U.S. Open here at Torrey Pines South. His stats profile definitely fits as he is Top 10 in Strokes Gained: Off the Tee and 13th in Driving Distance this season and while the irons may not be at their best, he is also Top 20 in putting. Topping it off, Rahm comes in off back-to-back wins at the AMEX and tournament of Champions and looking to make it three in row. He has a great shot and is one of my core plays in all formats.

He missed the cut here as an amateur back in 2018 but things have been much different in his first two trips to Torrey Pines as a pro. He nearly won last year leading the field gaining an insane 12.5 stroke tee to green but struggled putting and ended up 2nd. In 2021, he was only slightly above average ball striking but was excellent with the putter gaining three strokes and ending up T7. He is coming off an uninspiring T36 at the AMEX last week but gained 2.5 strokes ball striking and has now gained strokes putting in four straight events. Are the stars aligning for Willy Z to contend again and possibly take down the Farmers Insurance Open? I think so and will have exposure in all formats for DFS along with an outright bet.

Montgomery's incredible start to the season continued last week with a T5 at the American Express and wouldn't you know it, he checks all the boxes once again this week. He came into his rookie season on Tour ranked 136th in the world and has already moved up to 52nd after tallying an incredible eight Top 15 finishes in his first nine events(T57 the other finish). A lot of that success lies with an elite putter but the good news is that he has gained strokes on approach in two of his last three events so it's only a matter of time before he enters the winners' circle. It could be as soon as this week at Torrey Pines where he finished T11 last year as a sponsor's exemption. Lock and load in all formats.

With the success of Taylor Montgomery, almost all other rookies have gone relatively under the radar and Ben Griffin is one of those. He missed the cut at the season-opening Fortinet Championship but has since risen to 3rd in the rookie rankings making eight cuts in a row including a Top 5(Bermuda) and four Top 25 finishes. In this field, he ranks 17th in average finish and 18th in DraftKings average scoring over the last five events and is also 4th in my stats model ranking 26th in ball striking, 11th in par 4 scoring, and 14th in BoB%. Griffin is one of my top value plays this week and in play in all formats.

Also Consider: Thomas Detry who has now made all six cuts on tour this season after a T26 last week at the AMEX or Alex Smalley who has made the cut in seven of nine events but has Top 25 finishes in four of his last five

Max is #1 in my stats model on the sheet and #4 in my custom Fantasy National model this week checking almost every single box. While he isn't a bomber, he is still above average in terms of distance but where he excels is with the irons as he is 15th in SG: Approach and Top 25 in both Proximity ranges(175-200 & 200+) I have in my model this week. On top of that, he is an excellent putter(17th overall, 15th on Poa), ranks 9th in Par 4 scoring, 20th in Par 5 BoB%, and 4th in overall BoB%. He missed the cut here last year but does have some success here with a T18 in 2021, and T9 in 2020. Put it all together, and I think he provides us a solid floor for cash games with a mix of winning upside for GPP's.

Been on Taylor as a value play for a couple of weeks now and he matches what I am looking for from a stats perspective again this week. Looking at the last 24 rounds(via FNGC), Taylor ranks(in this field) 3rd in SG: Ball Striking, 24th in Distance Gained, 6th in SG: Approach, 4th in Par's from 450-500 yards and 6th in SG: Putting. His history here may look ugly(MC in 2021, T55 in 2020) but he went into both of those events with some ugly form which isn't the case this time around as he has made the cut in five of his last six events including two Top 5 finishes.