DFSR is proud to bring you, Chris Durell. He'll be bringing weekly PGA picks, analysis, and breakdowns to help you cash on DraftKings. As every week in DFS PGA changes with the course setup, field of players and weather, Chris will be providing a range of different picks for cash games as well as upside plays for tournaments. If you have any questions to lineup lock you can reach him a variety of ways. Leave your question/comment below in the comments section, find him in the DFSR Chat room or hit him up on Twitter(@Jager_Bombs9).

Chris is also currently providing his DFS PGA cheatsheet for FREE while it is still in BETA mode. You can also grab a copy of the Salary/DK Points/Ownership Trends Sheet HERE.

Welcome back for another week in daily fantasy golf. This week the PGA Tour travels to the TPC Deere Run for the 2017 John Deere Classic. Right off the top we have one of the weakest fields of the year as most of the big names have traveled to the Scottish Open in preparation for the Open Championship next week. That leaves us with just one player who sits inside the Top 20 in the Official World Golf Rankings(Daniel Berger-20th) and just seven of the Top 50 players. This doesn't mean it's a bad week for DFS, especially considering the tournaments on DraftKings are far more inviting than those of the Scottish Open despite the difference in field strength.

The TPC Deere Run course is always set up to favor scoring as it consistently ranks as one of the easiest courses on Tour with an average winning score of -21 over the past five years. Looking over the course, driving distance is much less of a factor this week with emphasis on placement of the drives to get a clean look at the large greens. This has me looking closely at Strokes Gained Off the Tee and Driving Accuracy. Then I will be looking even closer at Strokes Gained Approach as this is where the tournament will be won and lost. It will be important to not only get it on the greens but to get it close to the pin(Proximity) for better chances at birdies in this WEB.com Tour scoring fest. Par 4 and 5 scoring are factored with Par 4 slightly ahead as right around 50% of the total birdies for each of the last three JD Classic's have come from the Par 4 holes. Even though there are only three Par 5's, scoring on them will be important to keep up with the field as at least 500 birdies or 30% of the total birdies for the tournament have come on those three holes.

With all that in mind let's take a look at the course snapshot and then dive into my top picks for the tournament. 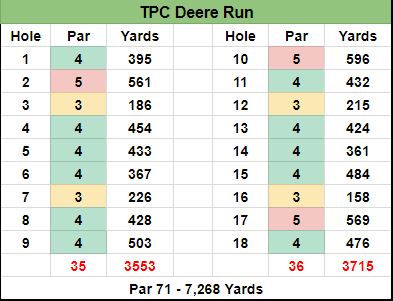 It was very close for my top course history pick between ZJ and defending champ Ryan Moore. With Moore coming off a back injury, I lean ZJ who comes back to TPC Deere Run with some sparkling history. He has made the cut in 12 of his 15 trips including nine straight which featured a win and six Top 5 finishes. I don't think you need to use him in cash games but makes an excellent GPP play that could be low owned looking at the early 50% sentiment rating on FanShareSports.

He had a lot of trouble with TPC Deere Run early in his career with a WD, missed cut, T67, and T32 in his first four trips. After skipping the event for five years, he returned and seemingly flipped a switch with a T13 in 2014 and finished T8 last year. He struggles off the tee ranking 99th in the field in SG: OTT but makes up for it with his 2nd overall rank in SG:APP and 6th overall rank in Par 4 scoring. He enters the week having made three straight cuts including his fifth Top 25 finish most recently at the Quicken Loans National. I will have shares of Na in all formats in this weak field.

He has some nice form coming into this week with a T5 at the Greenbrier but has been either really good or really bad looking at his season trends. He has only made 50% of his cuts in 2017 but has a runner-up, three Top 10's, and five Top 25 finishes. One of my top stats this week is SG: APP and he not only ranks 18th on the sheet, he has also gained strokes on the field in four of his last five events. I won't be using him in cash games but he makes a nice GPP play with upside at a low cost, especially on FanDuel.

After a rough, up and down start to the season he has been trending upward in search of his second career win. He comes into the week having made seven straight cuts including four Top 10's and two Top 5 finishes. He has played TPC Deere Run four times in his career with two missed cuts, a T30, and a T3 in his last trip in 2015. Lee also fits the stats model this week as he ranks 12th in SG:APP and 8th in Birdie or Better %. He is another player I will be using in all formats.

He tops the field in salary this week and I don't think you need to pay that far up in cash but he makes a very high upside GPP play. He trails on statistical darling Kyle Stanley in the stats model thanks to his elite 5th rank in SG: APP, 12th in SG: OTT, 7th in Par 4 Scoring, 9th in Bogey Avoidance, and is first overall on the sheet in Birdie or Better %. He hasn't played here before which, by default, brings his overall ranking down on the sheet but he comes in hot sandwiching a missed cut in the middle of a win at the St. Jude Classic and runner-up at the Travelers Championship.

You know it's going to be a weird week when Chad Campbell ranks at the top of the overall model. It makes sense, however, as he is the only player in the field to Rank Top 20 in all three categories(Stats, Form, History). His stats are highlighted by a 13th rank in SG: APP and 3rd overall rank in both GIR from 100-125 and 125-150 yards. He also ranks 18th in Par 4 Scoring and 2nd overall in Bogey Avoidance. He has made the cut here in all nine trips with one Top 10 and averages better than a Top 30 here in his career. At a value price on both sites, Campbell is safe in all formats.

Coming in under $7K on DraftKings and under $6K on FanDuel, Micheal Kim is my favorite value of the week. He has made six of his last seven cuts and while he has shown little upside he has been trending up in each of his last three tournaments. He finished T47 here in his first trip last season and ranks Top 20 in GIR from 100-150 yards, Par 4 Scoring, and Birdie or Better%.

Danny Lee leads all golfers so far this week with 17 tags and is tied with Kelly Kraft with 12 start recommendations. It makes sense as Lee is the cheapest of the four in teh upper tier. Daniel Berger and Kevin Kisner have been mentioned half as much as Harman and Lee so far which, to me, makes them excellent GPP plays this week. The only issue with Berger is the rest of your lineup construction as the value range is pretty thin this week with an average of $7,700 left on DK and $7,150 on FD. If Kisner continues to be the least mentioned of this group as we get closer to lineup lock I will most likely jam him in a lot of lineups. He has shown the upside with a win and six Top 10 finishes this season and ranks 4th overall in my stats model.

With his $8K price tag and excellent course history over the past three years, Kevin Na leads the tag count in this range with Zach Johnson slightly behind. The thing about ZJ is the two sit recommendations so far which comes from his current form this season(only two Top 10's). He has tremendous course history so my hope is that he falls outside the Top 10 in ownership this week. Speaking of course history and form, Steve Stricker owns both categories this week ranking 9th and 2nd respectively on the sheet. It was a bit surprising to see him third on this list but it is early and he trails by just one start recommendation. Ryan Moore comes in fifth on the list with just four start recommendations despite being the defending champ. It comes from the concern that he is making his first start since pulling out of the US Open with a back injury. Play at your own risk!

Like I mentioned above, Kelly Kraft is tied with Danny Lee for the overall lead in tags so far this week and trails the start count by just one. I talked about his form and stats in the write up above. If Kraft is the super chalk in this range, it would be worth pivoting to Wesley Bryan in the same range as he is getting mentioned less and has a profile that fits the course this week. He also finished T8 here last year in his first trip to TPC Deere Run. Bryson DeChambeau was a bit of a surprise in the Top 5 in this range seeing as he missed the cut in his only trip here. He does come in with some nice form but his inconsistency with the approach shots has me fading him if the ownership is going to be higher than normal.

The stage is built. The field is set. Now, let's fill this place up! #JDC17 pic.twitter.com/Gznv4HUEyF