It appears we can close the door on another "can't win" name as Paul Casey broke through with his second career PGA Tour win on Sunday. His first win came back at the Shell Houston Open in 2009 which seems like ages ago but almost no one deserved it more than Casey. He had made 25 straight cuts dating back to January 2017(Sony Open) going into the Valspar Championship and since the start of the 2015 season, has made a ridiculous 68 cuts in 77 events(88%) with 27 Top 10 finishes. The other big story from this past week was the incredible performance from Tiger Woods who finished T2 and ranked 14th in SG: OTT, 8th in SG: APP, and 5th in SG: ATG. His weak spot, and it wasn't that weak, was his putting which ranked 39th in the field. The highlight of the weekend? His 44-foot putt on the 17th hole to climb within one, which if you are human, must have given you chills of days of old. Check it out.

This week the PGA Tour heads to Bay Hill Club and Lodge in Orlando, Florida for the Arnold Palmer Invitational. The course is very demanding off the tee with trees, bunkers in the landing zones, water, and doglegs which put a premium on hitting the fairway to get a shot at hitting the greens in regulation. This will once again bring the "less than driver" strategy off the tee into play on a handful of the Par 4 holes and combined with length will leave players with a lot of 200+ yard approaches(see shot distribution below). The most convincing player quote I read this week(via Future of Fantasy Golfanac) is from Rickie Fowler:

Getting through the Par 4's at par or a few strokes below for the week will be huge in trying to work up the leaderboard. Where players will need to gain most of their strokes if they plan on winning will be on the Par 5's where a large majority of the birdies will come from(47% or more of total birdies in each of the last 5 years). Put it all together and this is where my key stats come from this week. Let's now take a look at some course information and trends, previous winners and scores, key stats, and then dive into the picks and don't forget to take a tour of the awesome flyovers from the Bay Hill YouTube channel(see below). 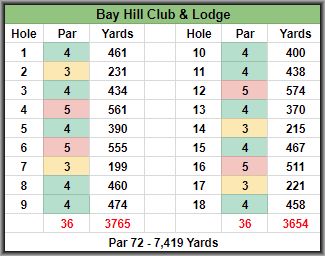 **Click HERE or the image above to see a hole by hole breakdown from PGATour.com. You can also click HERE to see a flyover view of every hole at Bay Hill on YouTube** 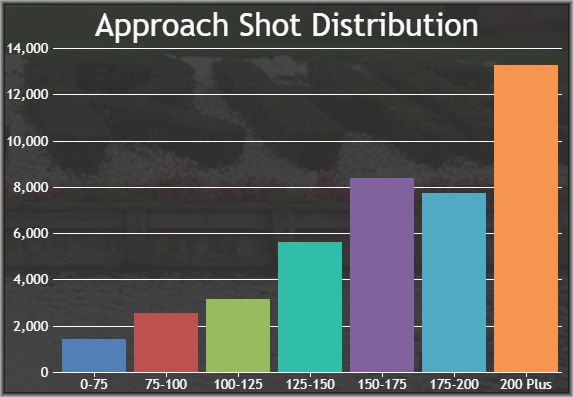 I am going the value route with my course history picks this week and it starts with Emiliano Grillo. He has played here twice finishing T17 in 2016 and improved on that last year finishing T7 which could have been so much better. He opened with a 67 and 68 making the cut easily but fell apart on Saturday shooting 78. He bounced back on Sunday, however, shooting another 68 which was very promising. He comes in with some form as well finishing 6th in last week's Hero Indian Open and T8 at the Honda Classic two weeks ago and has made all five cuts during the 2018 calendar year. At a value price on both sites, Grillo is in play in all formats.

Molinari has been even better here at Bay Hill with a larger sample size to boot. He has played here in each of the last five years, making all five cuts, and has finished Top in back to back years and three times total. The form hasn't been great this year but it hasn't been bad either as he has made four of five cuts with one Top 10 and is coming off a final round 68 at the WGC Mexico to give him a second Top 25 on the season. He also fits the stats model as he ranks 9th on my sheet in Strokes Gained: Ball Striking, 5th in Proximity from 175-200 yards and 6th in Proximity from 200+ yards. He is a little more expensive on FanDuel giving me pause but on DraftKings at in the low $7K range, he is also in play in all formats.

Looking at the form ranks this week, Jason Day sits right at the top and is my top pick. He is coming off a T2 at Pebble Beach, a win at the Farmers Insurance Open, and a 5th place finish at the Emirates Australian Open. Going back even further, he has not missed a cut since the Travelers Championship last June(12 events) and has not finished worse than T27 in that time. On top of the form, Day also returns to Bay Hill with some nice history as he won the event back in 2016. I don't think we need to pay up this far for cash games but for GPP's I will have a ton of exposure this week.

Noren comes in with some terrific form and ranks #3 in that category this week. He has played five events during the 2018 calendar year and has finishes of T2 at the Farmers(103 DK points), T21 at the Waste Management Phoenix Open(78.5 DK points), T16 at the Genesis(66 DK points), 3rd at the Honda Classic(92.5 DK points), and T14the the WGC Mexico(77.5 DK points). That is good for an average of 89.5 DK points per event which is third-best in the field this week. He played here for the first time last year and finished T49 but had nowhere near the same form this time last year so I trust him completely in all formats this week in the low $9K range on DraftKings.

At first, I didn't believe that Jason Kokrak ranked #2 in my overall model but upon further evaluation I get it. He is the only player on my sheet to rank Top 15 in all four categories(stats, form, DK average, history) and it starts with the stats model(ranked 11th). He ranks 25th in Strokes Gained: Ball Striking and with his distance has taken advantage of the Par 5's ranking 3rd in Par 5 scoring and 4th in Par 5 Birdie or Better %. He also comes in with some nice form having made 10 of 11 cuts this season with three Top 10's, the most recent at the Valspar last week. Finally, he returns to Bay Hill with some decent history as well with finishes of T56, T20, T6, and 4th and has the 11th best scoring average over the last five years here. All things considered, he is a top play in all formats.

For my final stats guy, I wanted to go off my custom stats model on Fantasy National Golf Club to get a better feel of current stats ranks. I sued the stats listed above in my key stats section and what I found was Patrick Reed who has been trending for some time now. He ranked Top 30 in my model over the last 24 rounds, Top 15 over the last 12 rounds, Top 10 over the last eight rounds, and #1 over the last four rounds after his T2 at the Valspar last week. With a price increase of $1,200 on DraftKings this week combined with his poor performance here in the past(T52 & missed cut in only two appearances), I feel he will be under-owned making him a nice GPP play.

Chris Durell has been playing Daily Fantasy Sports for five years and fantasy in general for more than a decade. He is active player in NFL, MLB, NASCAR, NHL and of course PGA. He lives in Saskatchewan, Canada with his wife and two daughters. You can follow him on Twitter at @Jager_Bombs9 for advice, strategy, answers to any PGA questions and how he copes with the winters up north.