Welcome back golf fans. This week the PGA Tour travels to Silvis, Illinois and the TPC Deere Run for the 2018 John Deere Classic. Things are heating up as the season's third major championship is just one week away. Other than the cash and the trophy, up for grabs this week is the final spot for the OPEN at Carnoustie which will go to the highest finisher not already qualified.

TPC Deere Run is a Par 71 setup that stretches over 7,200 yards and is pretty spread out when looking at the 11 Par 4's with three coming in under 400 yards, four between 400 and 450 yards, three more between 450 and 500 yards and one just over 500 yards. The Par 5's will be the biggest scoring holes this week as the three of them are all under 600 yards and play as three of the four easiest holes on the course. Hole #2 really stands out as there have been 14 or more Eagles made there in each of the last five years. This puts emphasis on not only Par5 Scoring but also on Par 5 Birdie or Better %. The fairways here at TPC Deere Run are some of the easiest to hit on Tour(71% average via Future of Fantasy Golfanac) which will turn the event into a wedge and birdie fest and the average winning score of -20 backs that up. With the OPEN coming up next week, the field is one of the weakest we have seen all season with none of the Top 10, one of the Top 20, and just four of the World's Top 50 golfers teeing it up. Let's now take a look at the course trends, previous winners, top stats and of course the picks. 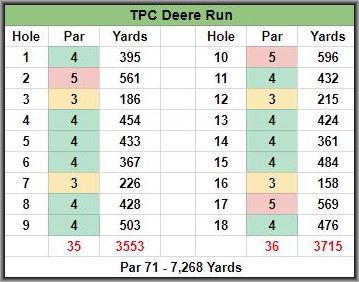 **Click pic above to see a hole by hole breakdown from PGATour.com** 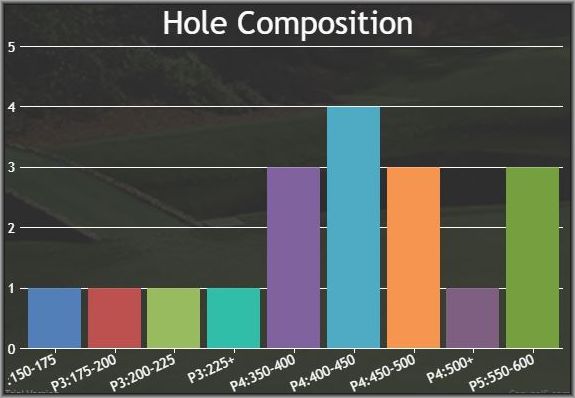 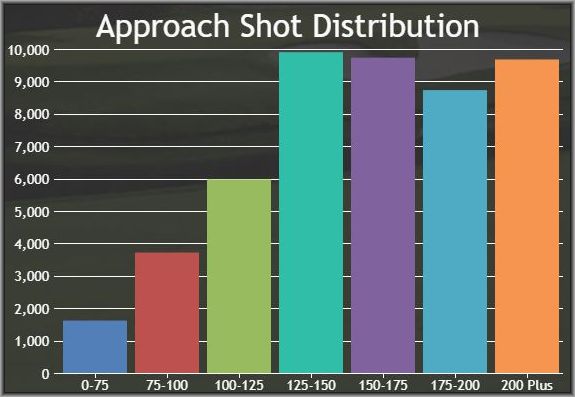 There is no arguing who is the top course history target this week with Jordan Spieth not in the field. Zach Johnson won here back in 2012 and has not only made 10 straight cuts here but has finished Top 5 six of his last seven trips to the John Deere Classic. Looking at the last 24 rounds data here at TPC Deere Run(via Fantasy National), he ranks 1st in Strokes Gained: Total, Tee to Green, Ball Striking, is 2nd in Strokes Gained, Approach and putting and 1st in DraftKings scoring. On top of the course history, he has also been extremely consistent in 2018 with the form making 16 of 17 cuts in stroke-play events including two Top 10's and 10 Top 25 finishes. All things considered, he is my top overall play this week.

Campbell has been off form for most of the season missing half of his cuts but if there is any place he can snap out of it, it is the John Deere Classic. He has played here nine times in the last 10 years making the cut every single time with one Top 10 and five Top 20 finishes. Over the last 24 rounds, he ranks 8th in Strokes Gained: Total and Tee to Green, 11th in Strokes Gained: Ball Striking, tied with ZJ for 2nd in Strokes Gained: Approach and is 13th in DraftKings scoring. There is no way we can trust him in cash games but he does make a nice option in a stars and scrubs GPP lineup.

I wrote him up last week in the current form section and he didn't let us down as he closed with a final round 64 to grab his fourth Top 10 in eight pro starts. During those eight events, he has shot 70 or better in 18 of his 26 rounds and sits with a scoring average of 68.9 overall. Even better news for Niemann is that the Top 5 at the Greenbrier also helped him secure his Tour card for the 2018-19 season so get used to seeing him from this point forward. Looking at the last 24 rounds data overall, Niemann also ranks Top 5 in Strokes Gained: Total, Tee to Green, Off the Tee, and Approach and is first in this field in DraftKings scoring in that timeframe. I will once again be overweight on Niemann at the John Deere Classic.

The only player who ranks better than Niemann in Strokes Gained: Total over the last 24 rounds? Yep, Bryson Dechambeau. He also ranks 4th in Strokes Gained: Tee to Green, 7th in Strokes Gained: Ball Striking, 5th in Strokes Gained: Putting and is 2nd to Niemann in DraftKings scoring. He has made 12 straight cuts dating back to the Waste Management Phoenix Open including a win at the Memorial and six total Top 10's. He missed the cut here in his first trip back in 2015, didn't play here in 2016 and then came back last year and won the tournament, his first career PGA Tour victory. To top it all off, he ranks #1 in my stats model on my sheet and when looking at the last 50 rounds using the same model on Fantasy National.

This will be Harkins first trip to TPC Deere Run for the John Deere Classic but if we leave out the course history, he ranks Top 25 in all other areas on my sheet. It starts with the stats model as he comes in at #16 this week with ranks of 36th in Strokes Gained: Approach, 42nd in Par 4 scoring, 11th in Par 5 scoring, and 5th in Birdie or Better %. I then plugged that same model into Fantasy National and looked at the last 24 rounds and he ranks mid-pack(54th) but stands out from an upside perspective as he is 5th in Birdie or Better Gained. He hasn't flashed winning upside yet on Tour but has some good cut making form having made eight of his last nine cuts. At these prices, he is in the conversation in all formats.

Dahmen was on quite a roll earlier in the year where he made seven straight cuts from the Honda Classic to Fort Worth Invitational but slipped missing back to back cuts at the St. Jude Classic and Travelers Championship. He appears to be back on track again making back to back cuts including a T23 at the Quicken Loans National and T5 in last week's Greenbrier Classic. Looking at my custom stats model for the last 24 rounds on Fantasy National, he stands out in a big way sitting 3rd overall with ranks of 1st in Strokes Gained: Approach, 5th in DraftKings scoring, 11th in Birdie or Better Gained, and 1st in Par 5 Scoring. He is another player in that mid $7K range I will be looking at in all formats this week.