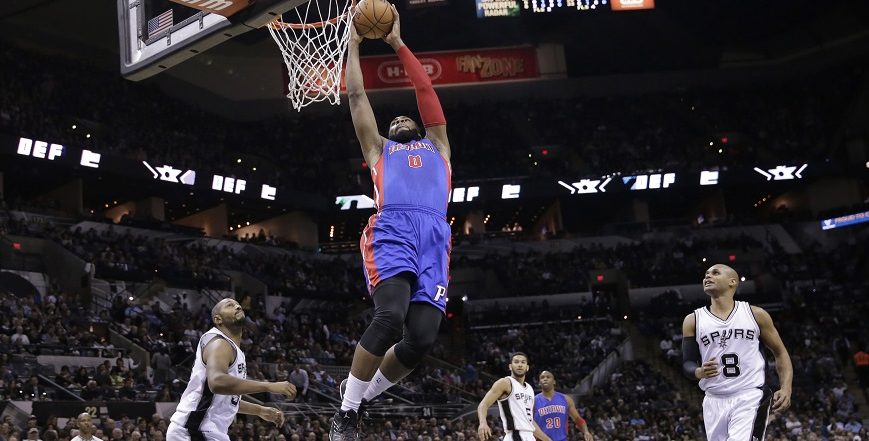 Happy (almost) New Year! We've got a solid 6 game slate that's going up against an absolutely wild day in the NFL, so if you're here reading about NBA DFS: God Bless you, you degenerate. Let's break it down.

Detroit Pistons at the Orlando Magic

Orlando is favored by 2 in a game with a 204 total.
This game actually has a few interesting DFS decisions for a game with such a low total. Let's start with Orlando.

D.J. Augustin FD - $5000 DK - $6600
Opponent - DET
Proj Pts FD - 25.24 DK - 27.03
It's hard to ignore Augustin, who we managed to run for his 44.4 fantasy point performance against Phoenix. The plan right now seems to be to let him run the point for as long as he can tolerate it in close games, and if that's the case, this FanDuel price is very likely just wrong. It's not a dream match-up with Detroit by any means, but it's not one that should terrify you either. On a small slate like this, he's just a good play.

Andre Drummond FD - $9800 DK - $11800
Opponent - ORL
Proj Pts FD - 48.59 DK - 48.78
Our system likes both sides of the center equation in this one, with Vuc and Drummond registering nearly identical projections here. Drummond dropped 23 and 19 on Vuc in there last meeting, and Vucevic posted an underwhelming 14 and 9 line. It's hard to look to a one game sample as anything particularly meaningful, but I actually place more weight on it in these head to head center match-ups. There's less variance in scoring around the basket and grabbing rebounds than there is, say, bombing 3 pointers. I'll give Drummond the slight nod here assuming the extra money winds up not being too important.

As for the rest of the Pistons, they mostly didn't show up in the last meeting since Drummond gobbled up so many of the rebounds and points. Our system doesn't especially like any of them, which will happen in a game with such a low total. I'll hope for relatively low exposure to this one.

The Chicago Bulls at the Toronto Raptors

There is no line on this game as of this writing.
Toronto is still in something of state of disarray injury wise, which might help this game actually stay closer than it normally would. It also opens up a nice amount of opportunity, of course.

Fred Vanvleet FD - $5500 DK - $5400
Opponent - CHI
Proj Pts FD - 36.63 DK - 37.41
VanVleet has been somewhat uninspiring recently, but these have been some weird games. He played 38 minutes in a close game with the Heat, and saw his minutes come in go while the Raptors got blown out by the Magic and 76ers and blew out the Cavs. These weird games scripts have kept his price artificially depressed, and he looks like an extremely good value play on a slate that is desperate for them. Chicago has been a top 10 match-up for opposing point guards this season, and I think we see VanVleet hope back on the value train.

Outside of VanVleet, our lineup optimizer pretty much just can't get enough of the Toronto guys. Pascal Siakam and Serge Ibaka look like insanely good plays against Chicago's weak front court, though it's worth noting that whoever lines up at center should have a distinctly better match-up from a defense-vs-position perspective.

Wendell Carter Jr. FD - $5400 DK - $5200
Opponent - TOR
Proj Pts FD - 28.54 DK - 27.65
You a gambling man (or woman, or non-binary DFS enthusiast)? If so, then you're going to want to at least take a look at Carter. He came out of nowhere and went off against Washington in 32 minutes, and the big question is: what happened? The thing with Carter is that he will seemingly *always* be in foul trouble. It's been 9 games since he had fewer than 4 fouls in a game, and the Wizards game was the only one in that stretch where he topped 24 minutes. It's nothing short of an absurd gamble to run him in cash, but you kind of knowo that the Bulls would like to leave him out there for 30+ minutes if he can stay out of his own way, right?

The rest of the Bulls just look awful to me. Toronto is a tough match-up and their minutes are too all over the place.

The Minnesota Timberwolves at the Miami Heat

Miami is favored by 3.5 in a game with a 211 total.
So there is a decent amount of outstanding news for this game, but we have a fairly good picture. Derrick Rose and Jeff Teague are doubtful, and this makes the T-Wolves pretty interesting.

Josh Okogie FD - $4300 DK - $3900
Opponent - MIA
Proj Pts FD - 23.21 DK - 22.88
Small slate, huge amount of new opportunity? That's pretty much all you need to know. You have a dramatic price and opportunity mismatch, even if this match-up with Miami is less than ideal. We know that Minnesota is happy to run their starters forever, and it's kind of hard to NOT pay a $4300-$4500 price tag on 35+ minutes. Jones is the safer play here on that basis, but Okogie can get there on the 25 he should be in line for.

I actually like Robert Covington and Andrew Wiggins fine as filler if your lineup demands it. Again, we're just looking at high floors on a shallow slate.

And then there's the Heat. James Johnson pulled himself from Friday's game with an illness, but we unfortunately didn't get to see what the Heat would do in response since the game was totally out of hand. If he misses here, spreading his 24-30 minutes between Kelly Olynyk and Bam Adebayo puts both of them squarely in play. Guessing after Heat big minutes is always terrifying, but that's where we'd be. I also think this lack of big depth could leave you with additional Hassan Whiteside shares, particularly on DraftKings where he's still too cheap.

The Oklahoma City Thunder at the Dallas Mavericks

There is no line on this game since Paul George's status is unknown.
Yep, that's the huge outstanding news here. If PG sits you'll get some incredible plays out of Schroder and Westbrook. You'll also get a nice throwaway option in Abdel Nader. Right now George is listed as probable, though, so that might not come to fruition. If George plays, then Russell Westbrook, Steven Adams and Jerami Grant are just generically solid 5x points per dollar plays against the Mavs. Dallas is as unspectacular a match-up as you can imagine, playing exactly league average defense and a slightly above average pace.

Our system obviously hates most of the Dallas guys against OKC's league best defense, with one perhaps surprising exception.

Maximilian Kleber FD - $4000 DK - $3500
Opponent - OKC
Proj Pts FD - 26.45 DK - 25.1
We're back in "what-if" land a little bit here, but if Matthews misses Maxi is back in play again. Some thought he'd lose minutes with Smith's return, but he actually added 5 minutes (even if he didn't improve his production). Still, if Kleber starts he'll be hard to pass up even in a tough match-up with the Thunder, particularly on FanDuel where you can toss your bums.

The Sacramento Kings at the Los Angeles Lakers

The Kings are favored by 1.5 in a game with a 231 total
Value for literal miles in a rematch of their last game. It'd be faster to list the guys who aren't good plays, but I'll humor you here.

Brandon Ingram FD - $6800 DK - $5900
Opponent - SAC
Proj Pts FD - 33.68 DK - 34.27
You think I'm kidding. To a man, these guys paid value against the Kings. With LeBron out of the picture there is just too much opportunity to go around, and for whatever reason the sites are refusing to price correct. The Kings are a dream match-up, to boot, playing the league's 2nd fastest pace and 8th worse defense.

The only guys I'm not looking at are the centers, who are splitting time even before we account for McGee's potential return.

On the Kings side, things get a little bit more confusing. Buddy Hield seems like he should be a lock in a match-up like this, but the Kings went away from him a bit to favor Iman Shumpert's defensive prowess. We are coming off a one point game where Hield couldn't stay on the court for 30+ minutes. Yikes.

Our system is off De'Aaron Fox for price reasons, but it likes Willie Cauley-Stein and Nemanja Bjelica.

The Philadelphia 76ers at the The Portland Trailblazers

C.J. McCollum FD - $6300 DK - $6100
Opponent - PHI
Proj Pts FD - 31.89 DK - 32.75
Appropriately priced players that you can consider in good match-ups or medium match-ups on small slates. Welp, that's where we are. McCollum probably has the worst match-up of the group, but he's also the cheapest relative to his average value. All three of these guys are fine but nothing exciting.

The big question over in Philly is Joel Embiid's status. He's currently questionable with knee soreness, and his absence would mean a huge uptick for everyone else. If he does wind up playing, our lineup optimizer is pretty hesitant to play many 76ers, with one exception.

J.J. Redick FD - $5200 DK - $5100
Opponent - POR
Proj Pts FD - 26.82 DK - 28.67
It's nothing to write home about, but Redick has put up 25 and 30 fantasy points in his last two games, and on a short slate getting a high floor our of the shooting guard position can be tough. Still, I think you can get enough from the Kings/Lakers game alone with the Shumpert/Hart value that this one is probably a pass as well.