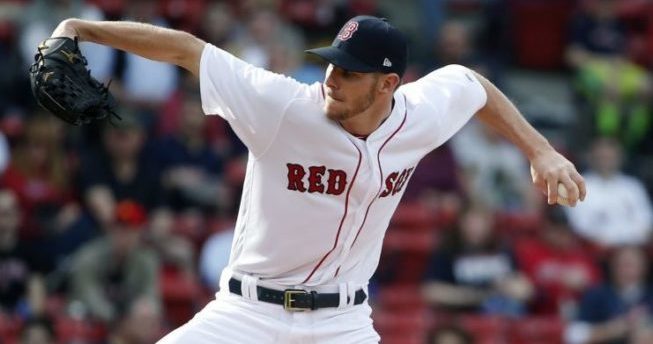 Thank god for roofs at stadiums because if we didn't have them, there would be a ton of weather on this slate. The cities/states with questionable forecasts include Seattle, Miami, Boston, Minnesota and New York. The first two games there have roofs and the final three don't have too much concern in terms of rain. That's all we can ask for and it appears we'll have a clean slate for the first time in a while. With that said, it's always imperative to check the forecasts just to make sure.

People don't give Morton the respect he deserves, as he's truly established himself as one of the best pitchers in the AL. His 2.64 ERA, 2.86 FIP and 30 percent K rate are impressive enough but his .284 xwOBA proves that it's no fluke. That would make him worth using against anyone but it's always a good idea to fire up a pitcher against the Marlins. In fact, Miami currently ranks dead-last in runs scored, OPS and xwOBA. That will become even tougher in Marlins Park, which ranks as the best pitching park in the majors based on park factors. That's why Miami is projected for only three runs here, as Morton will also get to face a pitcher in an NL park.

Sale got off to a nightmare start this season but recent results show that he's back to his Cy Young form. Over his last four starts, Sale has pitched to a 1.73 ERA and 0.81 WHIP while striking out 42 batters across 26 innings. That's obviously ridiculous and it's crystal clear that he's back. While Colorado traditionally has a solid offense, they always struggle on the road. In fact, the Rockies currently rank 27th in road OPS this season, which ironically matches their 27th-ranked road OPS from last season. They're also one of the worst strikeout teams in the majors, sitting 20th in K rate.

Luke Weaver (FD $9400 DK $8800) has been a pleasant surprise this season and gets a quality matchup against a bottom-five Pittsburgh offense.

Pearce has gotten off to a terrible start this season with a .117 average but he's always in play when facing a lefty. In 120 plate appearances against southpaws last season, Pearce put together a .400 OBP and .559 SLG en route to a .959 OPS. That says a lot about how much damage he does against lefties, as he always finds himself in the heart of the order. Kyle Freeland is not a lefty we need to fade either, with his 5.94 ERA and 1.34 WHIP in his back pocket while allowing at least five runs in three straight starts. That's spells disaster against a lineup with powerful righties J.D. Martinez, Mookie Betts and Pearce.

Thames traditionally sits against lefties because he absolutely mashes right-handed pitching. Since returning to baseball in 2017. Thames has an .880 OPS against right-handers. That makes this FanDuel price really hard to understand, as many players around $2,700 don't even get off the bench. Hitting in Miller Park should only help, with that ballpark ranking top-10 in park factor. While Jared Eickhoff has been a pleasant surprise, he has a career .854 OPS allowed to left-handed bats and allowed seven runs in his one start at Miller Park.

If you want a cheap first baseman, Tyler White is only $2,200 on FanDuel and faces lefty, Ryan Carpenter. Our highest per-dollar catcher is Wilson Ramos against Jeremy Hellickson.

Cano has made this article a ton recently and it's hard to understand why his price remains so cheap. We're talking about a guy with a career .304 average, .361 wOBA and .188 ISO. That's simply too much production from someone so cheap and he actually comes into this matchup seeing the ball well. In fact, Cano is posting a .338 average and .863 OPS over his last 19 games, hitting six doubles in that span. He's traditionally better with the platoon advantage in his favor too and Hellickson's 5.52 ERA and 1.61 WHIP makes him someone we want to exploit.

Profar had a breakout 2018 season but it's been a rough beginning to 2019 for the once top prospect in baseball. The simple fact is, this guy has too much talent to be priced this cheaply. What's encouraging is the fact that Profar has a hit in eight of his last 10 games, hitting two dingers in that span. Batting against Mike Leake is a good way to continue that mini-surge, with the right-hander posting a .381 xwOBA to go along with his 1.42 WHIP. That puts all of the A's in play with their aggressive nature, especially considering the fact that he has a career K rate below 20 percent.

Mondesi has truly established himself as one of the best shortstops in the game and getting to face Shelby Miller makes him hard to fade. The Texas righty has unsightly statistics, posting a 7.48 ERA and 1.92 WHIP to pair with his .400 xwOBA. Those are some of the worst numbers in the league and it makes the Royals one of the most stackable teams on this slate. Mondesi would be the heart of that stack, as he leads the team with 10.4 DK points per game. He's been even better recently, averaging close to 15 DK points per game across his last 17 games.

Stacking Astros is going to be extremely popular on this slate and rightfully so. Correa would be one of the biggest parts of that stack, as he comes into this matchup rolling. Over his last 28 games, Correa has collected a.375 SLG and .607 SLG en route to an OPS just shy of 1.000. That says a lot about just how much he's improved over the year, as he also gets a superb matchup here. Not only does Correa get the platoon advantage against Carpenter, the southpaw pitcher has a FIP north of 7.00 in 27.1 innings pitched at the major league level.

Guerrero is the most touted prospect in a decade and we're going to continue to recommend him until his price inevitably rises. This is a guy who's projected to bat .300 with 30-homer potential and he'll eventually get to that point. What we like here is that Guerrero gets to face a gas can, with Tyler Beede posting an 18.69 ERA and 3.46 WHIP so far this season. While that's only 4.1 innings of action, those are definitely eye-popping statistics. Guerrero does appear to be finding some rhythm at the plate too, collecting three hits across six at-bats in his last two games while walking twice.

Carpenter is another fixture in these articles and we're going to keep banking on him getting better. What we really like is this $3,700 price tag on DraftKings, as Carpenter was a $5,000 player throughout the second half last year. That alone makes him tough to fade, especially considering the fact that he gets the platoon advantage here. Since 2017, Carpenter owns an .872 OPS and .378 OBP against right-handed pitching. Folty is struggling right now too, posting a 5.94 ERA and 1.44 WHIP in his first two starts off the IL.

Martinez is one of the best hitters in the game and he's tough to fade anytime he faces a lefty. Since the beginning of 2017, Martinez has posted a 1.168 OPS against southpaws and a 1.126 OPS at home. That's obviously absurd and he's hard to fade against a guy who's allowed at least five runs in three-straight games. Martinez' .456 xwOBA is a great sign too, as that's simply one of the best marks in the game.

With Profar written up earlier in this article, it's clear that we want to stack against Leake. His .381 xwOBA that was mentioned earlier is the main reason why but what we really like is the profile. Leake is traditionally a contact pitcher and that does wonders for a team like the A's, who owns one of the best K rates in the league. This is a club that rarely strikes out and Leake could be in for a short outing with all of these sluggers getting good contact. Let's start with Piscotty, as he has an ISO above .200 since the start of last season. That means he's too cheap with the power potential he has and it makes it much easier to get some stud arms into your lineup. Pinder is underrated himself, as his career .320 wOBA and .188 ISO are too big of numbers for someone priced this cheaply.

Schwarber is actually our highest per-dollar play on the board and it's easy to understand why. It's the price, as Schwarber has way too much potential to be priced this cheaply. While we fade him against lefties, Schwarber has an OPS approaching .850 against righties throughout his career. His .356 xwOBA this season indicates that he's had a lot of bad luck too and that makes him a great bet to start bouncing back. Facing Tanner Roark is the icing on the cake though, with the right-handed pitcher posting a 1.43 WHIP, 4.80 xFIP and .352 xwOBA so far this season.