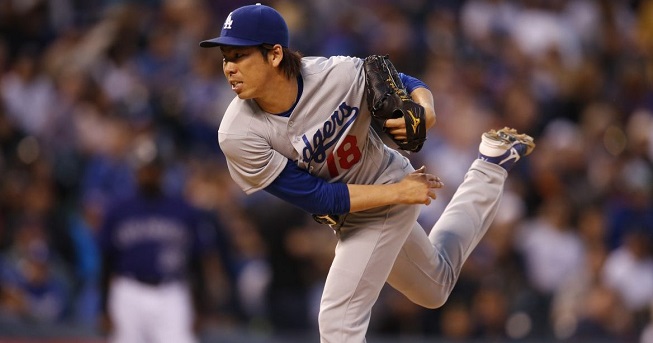 The first thing we need to check before any slate is the weather and we have plenty of questionable forecasts here. In fact, we need to key in on Washington, Pittsburgh, Chicago, San Francisco, Kansas City and Los Angeles. All of those teams have rain projected in the forecast and you need to keep an eye on that prior to lineup lock.

Wheeler hasn't been the most consistent pitcher for the Mets this season but we absolutely love him against an offense like this. Let's start with Wheeler, as his 4.74 ERA and 1.37 WHIP is not indicative of how good he's been. In fact, Wheeler is posting a .299 xwOBA, 3.20 FIP and 26 percent K rate. Those numbers tell us that he has some positive regression headed his way and facing the Tigers is a good way to start that. So far this season, Detroit ranks 29th in both K rate and runs scored while ranking 28th in wOBA. That's why Wheeler enters this game as a -190 favorite.

Maeda is personally one of my favorite pitchers in the league and he's hard to fade in a stellar matchup like this. The Pirates are simply one of the best matchups in baseball, with Pittsburgh sitting 27th in runs scored and 22nd in wOBA. That's really no surprise when you consider the fact that PNC is one of the best pitcher's parks in the Majors. That means you always have to target pitchers against the Pirates, especially guys like Maeda. In three of his last four starts, Maeda hasn't allowed a single run while collecting 27 Ks across 23.2 innings. You'll want to tread cautiously since he is coming back off of the IL here, but the Dodgers were already cautious with him, so I doubt it changes too much. Still, he isn't going to be as safe as Wheeler.

Jack Flaherty has been inconsistent so far this season but he has too much potential to be priced at just $8,100 on FanDuel.

Muncy has been making minced meat of righties since joining the Dodgers last season and this $3,400 price tag on FanDuel is really hard to understand. We're talking about a guy who has posted an xwOBA just below .400 since the beginning of last season while providing an ISO just short of .300. That says a lot about his power and that's truly evident by the fact that he has four doubles, five homers and 17 runs scored over his last 17 games. Facing a righty is the icing on the cake, with Muncy posting a .961 OPS against righties since joining the Dodgers.

Murphy has gotten off to a slow start this season but he's easily one of the best options on this slate. His recent form is hopefully a sign of things to come, with Murphy collecting three doubles over his last 12 games while hitting .462 across his last four fixtures. Getting back to Coors Field is a major reason why and we expect a BABIP-king like Murphy to hit close to .400 at Coors for the rest of the season. Facing Hess can definitely help him raise that average, with Hess posting a 6.75 ERA and 1.41 WHIP en route to a .408 xwOBA.

If you're in need of catchers, Buster Posey and Austin Allen pop up highly in our projection system.

The Twins have developed into the best offense in baseball and Schoop is a major reason why. While his $4,900 price tag on DraftKings is lofty, it's hard to overlook Schoop at $3,300 on FanDuel. Not only are the Twins one of the highest projected lineups night-after-night, Schoop comes into this matchup rolling. Over his last five games, Schoop has generated four homers and 10 RBI. That's obviously ridiculous and that form should continue against a guy who's sitting with a 5.31 ERA and 1.57 WHIP.

The stud prospect has shown some serious signs of promise early on and he's simply got too much potential to be in this $3,000-range. What's really amazing is the fact that Lopez has a hit in seven of his first eight games in the Majors. That has led to him providing a .303 average, which is really no surprise with his minor league numbers. At Triple-A this season, Lopez posted a .357 average and .457 OBP to match his beautiful .421 wOBA. He's an on-base machine, and all signs point to him continuing this at the Major League level. It's not great match-up, but Lopez is simply too cheap if he's batting 2nd.

Story is one of the highest-priced players on this slate and rightfully so. We want to get as many Rockies in our lineup as possible, as they're projected for more than six runs in this game. That's really no surprise when you consider the fact that Hess has a FIP approaching 6.00 and an xwOBA north of .400. Story's home numbers are just bonkers too, with the shortstop posting a 1.041 OPS at home since the beginning of last season. Not to mention, Story has four dingers over his last five games.

To say Seager is a regular in these articles would be an understatement, as we truly believe that he's worth using until his price inevitably increases. We believe that he should be closer to $3,500 on FD and $4,500 on DK. His career numbers tell us that's where he should be, as he's a .300 hitter with an ISO just shy of .200. That's all we can ask for from someone priced so cheaply and we love that he gets the platoon advantage against a struggling righty like Chris Archer. Over his last four starts, Archer is posting a 9.17 ERA and 1.87 WHIP, as Seager should do damage right in the heart of the Dodgers order.

Arenado is the highest-projected bat on this slate and it's really no surprise when you consider this situation. The aforementioned Hess numbers already put Arenado squarely in play but the slugging third baseman is one of the hottest hitters in the league right now. In fact, Arenado has multi-hit games in all of his last five fixtures while providing three homers and seven RBI in his last two games against the Orioles. That's ridiculous production and it's really no surprise when you consider the fact that Arenado has an OPS approaching 1.100 for his career at home.

Bregman is one of the hottest hitters in the league right now and he's tough to fade with the platoon advantage in his favor. Over his last 12 games, Bregman is posting a .400 OBP while tallying five homers, 12 runs scored and nine RBI. He always performs better against southpaws too, posting a .940 OPS and .550 SLG against lefties since joining the Astros. Rodriguez is struggling right now as well, pitching to a 5.43 ERA and 1.46 WHIP.

Matt Carpenter has been moved to fifth in the order and he should be in a good spot for RBI against Julio Teheran.

Let's keep the Rockies bats rolling, as we want to get as many of them in as possible. While Dahl has not been living up to lofty expectations, it's hard to argue with his .305 average. Much like most Rockies, Dahl absolutely rakes at home. Since joining the club, Dahl is posting a 1.028 OPS at home and has been nearly as good against righties. In that same span, Dahl is providing an .878 OPS against right-handed pitching. That makes Dahl quite the bargain in this price range and he makes for a great two-man stack with Tapia. Not only has Tapia regularly been batting either first or third in the order, he's actually taken away a ton of at-bats from Dahl because of his stellar play. After struggling the first three weeks. Tapia is hitting .303 over his last 29 games while accruing 15 extra-base hit in that span.

Ohtani has obliterated righties throughout his short career and we love him against Ariel Jurado. Since joining the Angels last season, Ohtani actually ranks Top-10 in the Majors in both OPS and wOBA. That says a lot about the potential that he has, as he's done the majority of that damage against right-handed pitching. Since the beginning of last season, Ohtani is posting a .991 OPS against righties. Ariel Jurado is a guy we want to exploit too, with the right-hander posting a 4.65 career xFIP.

Pederson is developing into one of the best leadoff hitters in the game and he's always in play when facing a right-hander. The aforementioned struggles of Archer is a huge reason why we like Perderson, as the Dodgers are one of the highest projected lineups on this slate. That puts the leadoff hitter squarely in play, with Pederson being one of the league leaders with 14 dingers thus far. All of those homers have actually come off right-handed pitching, with Pederson providing a .377 OBP and 1.058 OPS against righties so far this season.