This week the PGA Tour heads to Cromwell, Connecticut for the 2019 Travelers Championship. Despite the grueling summer schedule and the U.S. Open just wrapping up, the field is loaded with five of the Top 10(Koepka, Molinari, Thomas, Cantlay, DeChambeau) and 22 of the Top 50 players in the world teeing it up this week. Also of note when looking at the field are the sponsor exemptions starting with Victor Hovland making his pro debut this week after a T12 at the U.S. Open. Matthew Wolff, who was ranked #2 in the World Amateur rankings behind Hovland will also be making his pro debut this week. Collin Morikawa and Justin Suh also got exemptions, both of which turned pro earlier in the summer after outstanding college careers.

TPC River Highlands is a Pete Dye-designed Par 70 and at just 6,841 yards it is one of the shortest courses on Tour. While that immediately steers me to driving accuracy and fairways gained when starting my model, we see that hasn't been the case here. Two bombers in Bubba and J.B. Holmes finished 1st/2nd here last year and both lost over three strokes to the field in fairways gained. In 2017, three of the Top 4 on the leaderboard lost strokes gaining fairways and in 2016 three of the Top 5 lost strokes in that area. While it can give you an advantage hitting the fairway, it is not crucial this week but one thing all of those players mentioned above had in common are that they gained strokes when looking at Good Drives Gained. So from that, I will be weighing Strokes Gained: Ball Striking as a whole this week. The other key stat for me will be Par 4 Scoring as there are 12 on this course and if you are using Fantast National, make sure to key in on the 400-450 yard range as eight of those Par 4's are in that range. Birdies will also be important as the average winning score has been -15 over the last five years and the course has ranked outside the Top 20 in difficulty in each of those years. 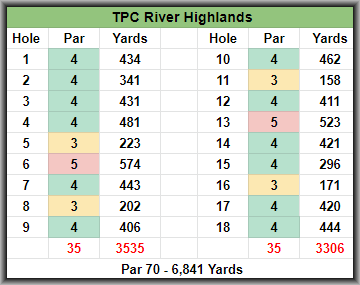 I will lead off with Paul Casey this week for a number of reasons starting with the course history. He has played here at TPC River Highlands four straight and has finished T2, T5, T17, 2nd and is 2nd behind Bubba in Strokes Gained: Total here over the last 24 rounds. After withdrawing from the Charles Schwab Challenge, he returned to the U.S. Open and picked up a T21 that included a final round 67. Casey is also 3rd in my stats model ranking 3rd in SG: Ball Striking, 1st in Good Drive %, 15th in Par 4 Scoring, 10th and 22nd in Proximity from 125-150 & 150-175 yards, and 24th in Birdie or Better %. I will be targeting him in all formats.

Last week it was DJ vs. Koepka at the top of the salary and this week it is Cantlay vs. Koepka. First of all, I will have exposure to both but lean Cantlay here as I think he will be slightly lower owned and the other factor is the price differential on FanDuel making lineup construction a whole lot easier. He almost killed the chalk last week as he made the cut on the number(+2) but came out firing on Saturday with six birdies shooting a 68 and then finishing with a 70 on Sunday to come in T21. While he ranked 56th in SG: Approach for the week, he finished by gaining over two strokes on the weekend and ranks 10th in the category over the last 24 rounds. He is 2nd in both my model on my sheet and my custom model on Fantasy National and will be one of my core GPP plays this week.

Streelman comes in #3 in my overall model this week as he checks almost every single box. It starts with form as he is coming off a 4th place finish at the Memorial and has made the cut in five straight with three Top 10's and is 4th in this field in Strokes Gaine: Total over the last 24 rounds. He also has history here at the Travelers Championship as he won the event in 2014 and while he missed the next two cuts, he rebounded with a T8 in 2017 and T33 last year. Hitting the trifecta, Streelman also hits on the stats model ranking 10th in SG: Ball Striking(13th OTT, 13th APP), 8th in Good Drive %, and 19th in Par 4 Scoring. All things considered, he is a core play for me in cash games and if it looks like he will be the chalk in this range, I will likely be underweight in GPP and pivot to some lower owned options. (Jump into chat on Wednesday for the chalk report).

Hadwin stands out a little more me this week on DraftKings where he is 30th in salary and coming in off an impressive 6th place finish at the RBC Canadian Open. It was also his 5th straight made cut in stroke-play events and is Top 40 in Strokes Gained: Total over the last 24 round sample size. Looking at the stats, SG: Approach(81st) is where he has mostly struggled this season but looking at the key ranges this week(125-150 and 150-175) he is 16th and 21st in this field. He has played here four times and after missing his first two cuts here in 2015 and 2016, he has improved with a T57 in 2017 and T42 last year. I feel that is his floor this time around with Top 25 upside.

From one Canadian to another, we have Mackenzie Hughes who has been rolling lately with a T8 at the Charles Schwab Challenge followed by a T14 at the RBC Canadian Open. He now returns to the Travelers where he has made the cut in both his trips(T42, T17) and is very cheap on both sites. Where he stands out the most, however, is the short-term stats model(via FNGC) where he ranks 7th in Par 4 Scoring, 19th in SG: Approach, 19th in Good Drives Gained, and 1st in Par 4 Scoring from 400-450 yards. He is in play in all formats.

After a terrible start to the season(missed 6 of first 7 cuts), Homa has turned a 180 and has not only made the cut in 10 of his last 11 events but also picked up his first career win at the Wells Fargo. He is another player who really stands out in the short term stats model this week. He ranks 15th in SG: Ball Striking, 7th in Par 4 Scoring(5th from 400-450 yards), 26th in Good Drives gained, and 20th in Birdie's gained. Like Hughes, he is a value play I will consider in all formats this week.