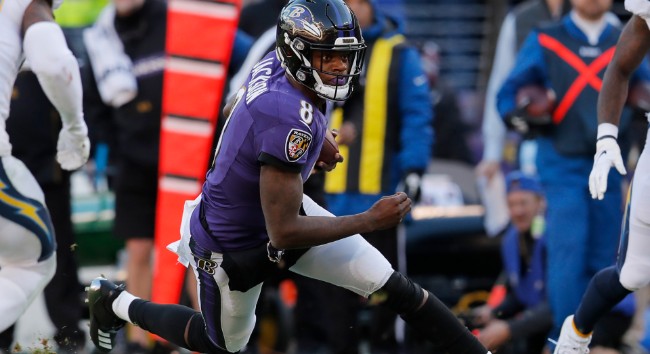 We already covered some early looks at optimal NFL lineups for FanDuel and DraftKings when both sites released prices. Now let's start drilling down a little further with some rushing attacks in EV+ spots for Week 1.

START YOUR FREE TRIAL NOW!
A general rule of thumb in NFL DFS cash games is to begin targeting running backs and running attacks that are in advantageous situations. This is an oversimplification of course but there are some basic metrics we can look at ahead of time to determine whether a running back is in a "good spot." Vegas lines continue to tell us quite a lot about expectation leading into a game. The following two graphs show the Vegas spread a team entered a game with and where the average rushing attempts and yards landed.

See that steady downward trajectory as the Vegas line became less favorable for a team? As a quick and dirty rule, we want to target running backs on the left side, those who are favored, preferably at home. It makes sense; teams who come in as heavy favorites are typically better, get a lead early and can run the game out late. Yes, there are diminishing returns for RB1s as the lead extends too far. At some point, teams will start giving their back-ups reps. But for the most part, we want our running backs to be on the favored team.

Understanding all of this, there are some key spots that stand out for Week 1.

Mark Ingram FD 6600 DK 5100
Opponent MIA
Proj Points FD - 11.69 DK - 12.69
From Week 11 on, when he took over the starting quarterback role for the Ravens, Lamar Jackson was 7th overall (that’s the entire NFL) in total rushing yards (556) from scrimmage and sixth in total carries (119). The Ravens’ running back Gus Edwards? He was fourth in both yards (654) and carries (122). The Ravens had a plan to keep it on the ground and it worked. They won six of their final seven games on their way to the playoffs. Rest assured they’ll take a similar approach this season. They enter the season as -4 home favorites against a Dolphins’ team gashed by the rush in 2018. Miami allowed the second-most total rushing yards and were 26th in yards per attempt.

Mark Ingram will enter the season in that Gus Edwards’ role in the Baltimore backfield. Often the second fiddle/give Kamara a breather/we’re up big guy in New Orleans, Ingram will now have a chance to burden a heavier load. He could press into the high teens, at least, in touches to start the season if the Ravens maintain a similar attack and want to keep him the feature guy.

That could be a little speculative from a cash game perspective if trying to read the running game. But Jackson might end up as the safest dollar-for-dollar quarterback on the slate with the way Baltimore uses him in the offense.

Dalvin Cook FD 7400 DK 6000
Opponent ATL
Proj Points FD - 15.56 DK - 17.39
Cook may very well be the chalk running back option on DraftKings for Week 1. The $6000 price tag is looking very much like a mistake. The Vikings were at times cautious and at other times just downright confusing with Cook last season as he worked his way back from the 2017 ACL tear. He struggled with some other injury issues last season that caused him to miss some games and Minnesota also had Latavius Murray around as a secondary option. No such issues are present now though and Cook could be given the full bulk of the running back load. He averaged more than four targets per game last season in the passing attack and should see the average carries per game tick up substantially this season.

Nick Chubb FD 7400 DK 6400
Opponent TEN
Proj Points FD - 15.46 DK - 16.03
Kareem Hunt is suspended the first eight weeks of the year and Browns traded away Duke Johnson. That leaves Chubb almost all by his lonesome in the Cleveland backfield when things kick off Week 1. In Week 7, the Browns finally realized Carlos Hyde was better off on the scrap heap and Chubb became their starter. From that point on, Chubb was fourth in the NFL in rushing yards (823), third in carries (176) and fifth in overall touches (204). Dude was every bit a bellcow running back and opens the season in a fantastic spot on what could be a high-flying Cleveland offensive attack. Tennessee was middle of the road in DVOA against the rush last season and that -5.5 line has Chubb looking like he’ll be running downhill in this one.

Chris Carson FD 6600 DK 5700
Opponent CIN
Proj Points FD - 12.86 DK - 13.49
From Week 3 on, when it looked like the Seahawks were a little more comfortable ramping up his touches, Carson was one of the better volume running backs in all of football. He ranked only behind Ezekiel Elliott, Saquon Barkley and Todd Gurley in rushing yards from that point on. He didn’t see a ton of work in the passing game, but that could change this season. The Bengals come into this season looking very much like the disaster they were in 2018 when they ranked 26th in rushing defense DVOA. At -9.5, the Seahawks are the biggest favorite on Week 1’s Main Slate of DFS contests. If you believe Carson is close to the workhorse then he’s coming at very advantageous prices, especially on FanDuel.

What other rushing attacks are you looking to target in Week 1 for FanDuel and DraftKings?