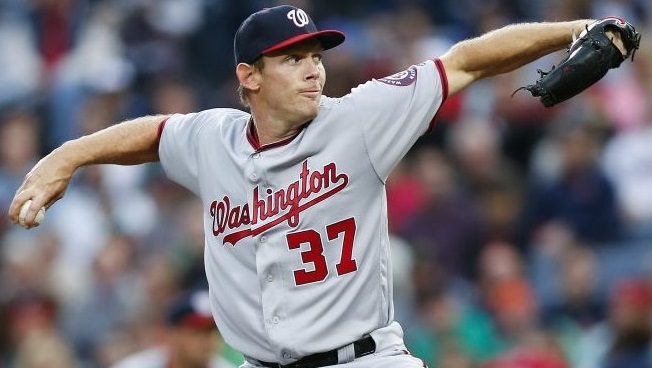 Stephen Strasburg FD - P 10800 DK - SP 12200
Opponent - PHI (Jason Vargas) Park - WSH
FD - 35.42 DK - 19.54
The options are limited today which makes paying up for the best pitcher the optimal route. This brings us to Stephen Strasburg on the early slate and while the Nats have locked up a playoff spot they are still trying to hold off the Brewers for the top Wildcard spot and home-field advantage in that one-game playoff. Strasburg has been terrific down the stretch posting a 1.80 ERA/2.84 xFIP over his last eight starts with a 32.4% K rate and 13.8% swinging-strike rate. He now faces a Phillies team that will miss the playoffs and have struggled down the stretch posting a .294 wOBA and 78 wRC+ over the last 14 days. Paying up for Strasburg is my top priority in all formats on the early slate.

The main is one game smaller but has more pitching options with my favorite being Zack Wheeler who checks every box. The Mets appear to be facing elimination from playoff contention as I write this but not due to the effort put forward by Wheeler who has averaged around 6.5 innings per start over his last five while allowing just one earned run in each. He now gets a plus matchup against the Marlins who he has had a ton of success against and have recorded a 78 wRC+ and 25% K rate against right-handed pitching this season. Fire up Wheeler in all formats.

Also Consider: Aaron Civale(CLE) if you are looking to spend up more on your bats

He has come off the bench in each of the last two games but should get back in the starting lineup today against a lefty. Over 122 plate appearances against southpaws this season, Kendrick has been elite hitting .372 with a .421 wOBA and 159 wRC+ and comes in with hits in six straight starts. The decision is a heck of a lot tougher on DraftKings where he is in the $5k range but he is a near lock on FanDuel where he comes in under $3K and is one of my top values on the slate.

The Astros are close to locking up the top spot in the American League and home-field advantage through the playoffs and an elite matchup on Thursday night will definitely help get them there. They will be facing Jaime Barria who has been really struggling in the second half posting a 7.16 ERA/5.80 xFIP while giving up 18 home runs across 11 appearances(nine starts). The top of the lineup is very expensive and will be tough to fit in cash games if you plan on paying up for a pitcher so I will dive down the lineup. Yuli Gurriel is affordable on both sites and comes in with hits in nine of his last 11 games and is having a career-year with 30 home runs while posting an impressive .302/.347/546 slash line. For Chirinos, the average(.242) hasn't been anything to write home about but he does have 17 home runs on the season and comes in with hits in five straight games. Both players are in my player pool in all formats.

The Twins have yet to clinch the division or a playoff spot and as of writing this they are down a run so you can bet the entire team will be in the lineup Wednesday. They get a terrific matchup against a struggling Jordan Zimmermann who has given up 19 earned runs in his last three starts, posted a 7.32 ERA since the All-Star Break while giving up at least one home run(13 total) in 10 of those 12 starts. Arraez has been back up in the leadoff spot lately and has hits in six of his last eight in the role. All things considered, Arraez will be a core play for me in all formats today.

MIddle infield, especially second base, is a place I regularly hunt for salary relief and tonight is no different. I will be turning to Ian Happ and while he isn't a regular in the lineup he is projected to get another start on Thursday and comes in hot with hits in four straight including two home runs. His price has gotten into the $4K range on DratKings limiting him to GPP only for me but on FanDuel in the mid $2K range he is in play in all formats.

Jorge Polanco FD - SS 3600 DK - SS 4500
Opponent - DET (Jordan Zimmermann) Park - DET
FD - 9.82 DK - 7.61
Shortstop is a bit tougher to fill today but it is hard to ignore the value with Polanco who is the 6th most expensive option on DraftKings on 5th most expensive on FanDuel. He hasn't been great lately but he has still been consistent with hits in seven of his last 10 games for an average of 7.6 DK/10.2 FD points per game. The Twins are in a great spot against Jordan Zimmermann and Polanco is definitely in play in all formats.

Also Consider: Trea Turner(WSH) if back in the lineup or Cristhian Adames(SFG) as a punt play

Here is what I wrote about Rosario last night:

For value, especially on FanDuel, I will be turning to the Mets Amed Rosario. He bounces around the lineup and obviously gets a huge bump if back up near the top tonight but either way comes in hot with hits in five straight and 13 of his last 16 games. He isn't going to win you a GPP with a lack of overall upside in a pitchers park but provides a solid floor(for the price) more times than not and will be in my cash game player pool on both sites.

Rosario did end up hitting down in the lineup but still hit value going 2 for 4 with an RBI and a run scored. Tonight, he has a chance to get back up towards the top of the lineup with the injury to Jeff McNeil. I will once again be running him as a PTS/$ value in all formats.

The Twins have not yet announced a starter but what I do know is that we are going to need some values and even punt plays to jam Strasburg into our lineups on the early slate. Lugo is one of those players I am looking at as he went into Wednesday red-hot with three straight multi-hit efforts and at least one hit in seven of his last nine games. He is cheap on both sites and I will have him in my player pool in all format today.

The Angels lineup as a whole takes a huge hit without Mike Trout but it is hard to argue the value with David Fletcher on this smaller slate packed with top pitchers. He has also be solid lately with hits in three straight and has been a consistent option all season as he entered Wednesday night's game with a .293 average and .351 on-base percentage. With a lack of upside, I will have much more exposure in cash games tonight.

Also Consider: Jose Ramirez(CLE) who has been on a tear since returning from injury

Back to the Twins in the outfield with their elite matchup against dumpster fire, Jordan Zimmermann. If you have the salary to spend up Eddie Rosario is the play for me as he comes in red-hot with five multi-hit efforts in his last 10 games while averaging 12.6 DK/16.9 FD points per game. With both Max Kepler and Marwin Gonzalez dealing with injuries, LaMonte Wade Jr. has gotten an opportunity for more playing time and went into Wednesday's game with hits in three straight with a double, triple, and a home run as well. To get Strasburg in our lineups, we are going to need some value and Wade fits the bill on a team that scores a ton and is in a plus matchup. If starting he is in play in all formats.

With Jeff McNeil missing the rest of the season it opens up some playing time for Brandon Nimmo and when in the lineup lately he has been hitting in the leadoff spot where I expect him tonight. He is definitely not Mr. Consistent hitting .213 on the season but has been productive lately and a top PTS/$ play averaging 9.0 DK/12.2 FD points per game over his last 10. Conforto hasn't been very consistent either(.255 average) but has upside as he has set new career-highs in home runs(33), RBI(91), and runs scored(88). He likely gets a bump up the lineup from his usual 4/5 spot which also adds value tonight. Both are in play in all formats.

Also Consider: George Springer/Yordan Alvarez(HOU) in the top tier or Mark Canha/Khris Davis(OAK) as a cash and GPP play respectively