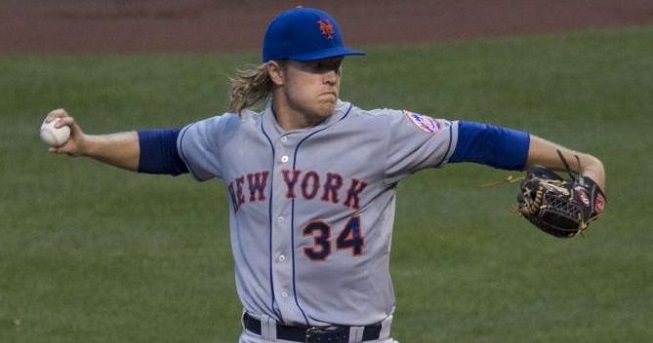 Now’s your chance to get DFSR PRO, which will give you access to our MLB and NBA optimizers and our new player lab! Get started for free by clicking the button below.
START YOUR FREE TRIAL NOW!
It's here boys and girls! It's the final day of the regular season. If you're unaware of how this works, it's simply one of the most bizarre days of the season. Some players play just one inning, some pitchers throw 135 pitches and some random starters make appearances out of the bullpen. Trying to predict what will happen on this day is nearly impossible but we'll do our best to provide some value for you guys.

Noah Syndergaard FD 8000 DK 9600
Opponent - ATL (Mike Soroka) Park - ATL
FD - 31.66 DK - 16.68 Syndergaard has been struggling recently, but it's lowered his price to this tempting number. This is a dude who has a 3.17 xFIP and 26 percent K rate for his career. He's shown flashes of that this season, pitching to a 1.82 ERA and 0.98 WHIP between July and August before struggling over his last six starts. While Atlanta is a tough matchup, they might send out a terrible lineup with their playoff odds already being decided. They'll also be without Ronald Acuna for sure and it's very possible that this will be a Triple-A lineup in one of the most pitcher-friendly parks in baseball. After Syndergaard, your options are honestly horrifying. I don't think you want to play anyone who is going to be in the playoffs, with the possible exception of Gerrit Cole, who is pitching for his 20th win of the season today.

Maybe it's a day for Eduardo Rodriguez? Will the Twins really be concerned about holding back Martin Perez? Today's not for the faint of heart, my friends. Tread cautiously.

This FanDuel price makes no sense at all. This dude has been one of the best hitters in the AL since last season and I'd argue that he should be $1,000 more on FD. Dating back to last season, Voit has a .384 OBP, .518 SLG and .902 OPS. That's really all you can ask for from a player priced this cheaply, especially in such a potent lineup. This Yanks lineup hitting in Globe Life Park makes this even scarier for Lance Lynn, with NY projected for about six runs in the second-best hitting parks in baseball. Lynn has been struggling recently too, pitching to a 4.61 ERA and 1.44 WHIP over his last seven starts.

It's sad but Votto is simply not the same player he used to be. These DFS sites are privy to that though and it's lowered his price to this number. That's the thing that makes him intriguing though, as he's got too much talent to be priced this low. He still has great numbers against righties, posting a .365 OBP and .825 OPS against them this season. Those are incredible numbers from a player this cheap and it's not like he has to face anyone good here. Trevor Williams is toeing the rubber for Pitt and is currently pitching to a 5.52 ERA and 1.44 WHIP this season. If you're in need of a catcher, Buster Posey gets to face a lefty and is super cheap on both sites.

The Yankees are one of the sneakiest stacks on the board. Many people will fade them tomorrow against Lance Lynn but that would be a mistake with them projected for so many runs. Torres would be a major part of that in the heart of their order, as he's in the midst of a breakout season. In fact, Torres has a .538 SLG and .876 OPS this season. Much of that has come recently, with Torres amassing a .926 OPS over his last 44 games played.

Picking second basemen absolutely sucks but Merrifield is always a solid option against a lefty. That's crystal clear when you see that he has a .306 AVG, .355 OBP, .505 SLG and .860 OPS against left-handers since 2017. That's pretty much on par with what he's been doing this season, as he's actually been posting a .300 AVG and 30 steals per year in that same span. That's bad news for Martin Perez, with the Twins southpaw pitching to a 5.13 ERA and 1.52 WHIP.

Francisco Lindor FD 3900 DK 4600
Opponent - WSH (Joe Ross) Park - WSH
FD - 11.26 DK - 8.58 Lindor has been brilliant this season and it's amazing just how good this kid could be. Providing 31 dingers and 22 steals shows the sort of value he provides in 141 games played and he'd be an MVP candidate if his team played a little better. What we like here is that he gets to bat from the left side, with Lindor accruing a .295 AVG, .551 SLG and .881 OPS against right-handers this season. Ross happens to be a struggling righty too, pitching to a 5.90 ERA and 1.74 WHIP this season.

Gregorious will be a key piece to our Yankees stack because he's actually one of the only guys who get the platoon advantage from the left side. Since 2017, Gregorious has a .272 AVG, .501 SLG and .820 OPS against right-handed pitching. That's no good for a struggling pitcher like Lynn, especially in such a tempting hitter's park. Any hitter with these sort of splits in such a good hitter's park is definitely in play, particularly at this sort of price.

This dude is quietly having one of the best power seasons of recent memory and it's crazy just how little publicity he's getting. I mean, he's one dinger away from 50 homers and a lot of that production has come recently. In fact, Suarez has collected 15 homers and 25 RBI en route to a .439 OBP and 1.258 OPS over his last 30 games played. That's borderline absurd and it really makes him enticing against Williams and his 5.52 ERA.

Here are the final two pieces to our Yankees stack. The reason we like Stanton is because he's way too cheap. This is a dude who has a career ISO in the .300-range and can double-dong on any given slate. That power becomes even more attractive in a park like this, as he actually homered on Friday night in his best game of the season. Gardner has found a nice power stroke of his own, hitting 11 dingers over his last 25 games en route to a .619 SLG and .923 OPS. These two are actually projected to hit third and fourth for this club and that would make them key pieces in this stack.

Choo is simply too cheap. While we've discussed the Yankees greatly, the Rangers also benefit from playing in this tempting ballpark. Choo especially, as he typically bats leadoff for Texas. That's really no surprise when you see that Choo has a .381 OBP and .881 OPS at home this season. He's also much better against right-handers, totaling a .376 OBP and .850 OPS against them since 2017. We're certainly not worried about Masahiro Tanaka, with the NY righty pitching to a 4.47 ERA and Texas projected for about five runs. Tanaka could also turn this over to the bullpen rather quickly, so we won't be afraid of running any Ranger today.