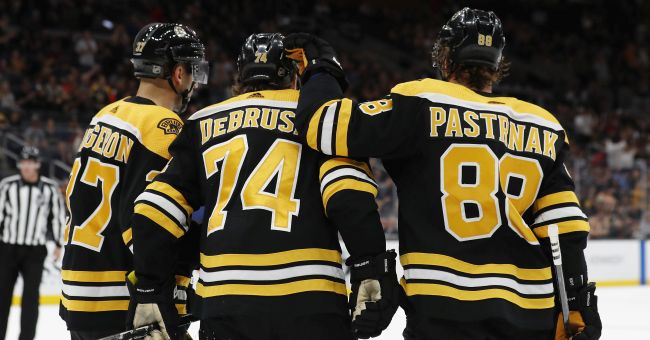 Thursday night brings us a monster 11-game slate that should be chock-full of offense as it includes four games with a 6.5 Vegas total. Let's dig in and take a look at some core plays at each position for FanDuel and DraftKings.

The goalie position is a bit tricky as the top goalies are either in below-average matchups, struggling, or on the road so let's start with the one I am most confident in tonight. Bishop is off to another good start with the Stars this season and enters the night with a .926 save % and after two rough starts rebounded in a huge way saving 72 of 76 shots(.947 save %) in back to back wins vs. the Avs and Preds. Tonight he and the Stars are -140 road favorites against a Ducks team that has lost seven of their last 10 games and own the 28th ranked home offense. On FanDuel, he is the second most expensive goalie making the decision very close but on DraftKings he is my favorite PTS/$ goalie as the 10th most expensive option at the position.

Fleury fits under the category of top goalie who has been struggling as he has allowed four goals in each of his last three starts bringing his save % down to .909 for the season. I am not too concerned here as the Golden Knights are in a great spot as -260 home favorites against a Kings team that has scored two or fewer goals in six of their last eight games while ranking 28th in road offense on the season. I prefer Bishop's price on DraftKings tonight but on FanDuel, I will ride with Fleury at an $800 discount and plus matchup.

**Update - Malcolm Subban is starting for the Golden Knights. I won't be using in cash games but he does make a decent GPP pivot.**

This won't be a game you will likely want to watch unless you are a Rangers or Devils fan as both teams have been a bit of a mess this season sitting at the bottom of the Metropolitan division. For fantasy, however, it is a great spot and I will start with the home team who are -155 favorites tonight. Mika Zibanejad jumps off the page in this matchup as he enters the night red-hot with 12 points in his last 10 games but it is is the shot volume that draws my attention as he has 40 in those games giving him a very high floor. Against the Devils 29th ranked defense, Zibanejad is my favorite center on this slate.

For value at the position, I will be turning to another plus matchup with Vincent Trocheck. He hasn't been the offensive force we came to know in 20179much to do with injuries) but has been solid lately with points in three of his last four and eight over his last 10 including 28 shots on goal. It comes down to price and the matchup against a Canucks team who had their winning streak broken in a big way with a 9-2 loss on Tuesday and have been much worse on the road overall allowing 3.5 goals per game on the season. From a PTS/$ perspective, Trocheck is near the top of my list tonight in all formats.

Also Consider: Patrice Bergeron(BOS) who leads all centers on this slate with an average of 4.4 combine shots blocks per game

If paying up at the position, you can't really go wrong with either of these superstars tonight. Let's start with Patrick Kane who has been scorching hot lately with 15 points in his last 10 games to give him 55 on the season and get inside the Top 10 league-wide. On top of that, he is back providing that elite floor we have come to know as he has 39 shots in those 10 games backed up by an 18.0 shot attempts per 60 on the season. He now faces a struggling Predators defense that has allowing four or more goals in five of their last six games and rank 25th in overall defense on the season.

For Pastrnak, the numbers are very similar lately as he has tallied 14 points and 39 shots in his last 10 games. The overall shot volume is even better as well as he is averaging the fourth-most shot attempts per 60(22.1) on the season. That shot volume has paid off as well as he also leads the league 32 goals as a part of one of, if not the most dangerous line in hockey. Both Players are elite plays in all formats. take your pick.

The reason I listed multiple elite-priced plays above is that there is a ton of value to tie it all together tonight. I am going to start with Blake Coleman who has continually been under-owned and it makes sense as the Devils are a mess. While the upside is somewhat capped with Coleman, the floor he provides for cash is near elite in itself as he has a whopping 45 shots over his last 10 games backed up by a 15.8 shot attempts per 60 on the season. Combine that with a plus matchup against the Rangers 27th ranked defense and Coleman is in play in all formats.

I will also be going back to the well with Ilya Kovalchuk who seems to have found a spark with his new team. He now has points in both games with the Habs(three total) along with five shots while skating on the top line and powerplay unit. The price is going up slowly but still a great spot at just $4K on both sites putting him squarely in play in all formats.

Also Consider: Max Pacioretty(VGK) who has been excellent lately with 10 points and 43 shots in his last 10 games and now faces a Kings team that ranks 25th in road defense

With all the top plays we are going to want to jam into our lineups tonight, I will be looking at a value approach on defense. It starts with Connor Murphy who may not win you a GPP but has provided consistent cash game value almost all season and has been near elite lately. He enters the night with a combined 53 shots/blocks over his last 10 games and with four points added is averaging 12.5 fantasy points per game in that time. He is an elite cash game play tonight with his best value coming on FanDuel where he is still under $4K.

The 21-year-old blueliner has spent most of the season with the Springfield Thunderbirds in the AHL but has been a solid punt for cash games when up with the big club. Since being recalled at the end of December, he has averaged over 3.5 shots/blocks per game. The system has him as one of the top PTS/$ plays at the position and one of my top cash plays to help us get to an elite goalie and multiple elite forwards.