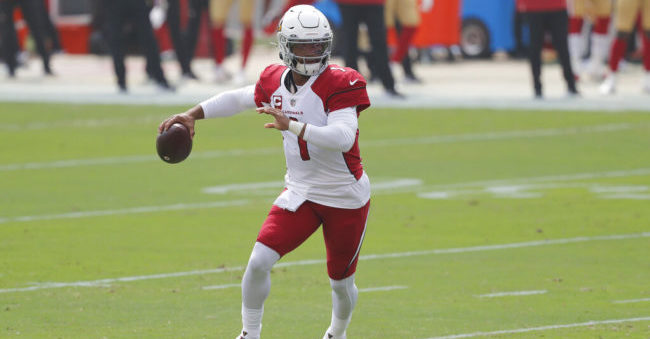 On the surface, this appears to be a bad matchup against the Rams talented defense but not so fast. They have not been that impressive early on giving up the 8th most passing through three weeks with most of that coming from Tom Brady a week ago(432 yards). Kyler not only brings the same passing upside as Brady and has a very comparable stable of weapons, but he has also adds big upside with his legs(5.7 att per game) and the Rams have also given up the 8th most rushing yards(22.3) per game to QB's.

Like I mentioned above, the Cards have a very diverse pass-catching group led by superstar Deandre Hopkins. After commanding a huge target share in this offense a year ago, he has only received 18 targets through three games which is a bit concerning and the reason I won't have exposure in cash games. For GPP formats, I love pairing Kyler with Nuke as he is going to be very low-owned due to the combined lack of volume early on and the other top wideouts in plus spots. The matchup also drives more to Hopkins on the outside as Jalen Ramsey is the top corner and has been running over 55% of his coverage in the slot which could neutralize Kirk and Moore this week as tough matchups affect young players much more than the vets.

You can't hold down an elite receiver for long and I love targeting this very high upside stack even more when it will be low owned. Lock and load!

First up in this category is the Browns passing game. With Jarvis Landry out and OBJ's price still fairly depressed, he is likely to be a Top 3-5 owned wide receiver against a Vikings defense that has given up the 6th most passing yards per game and ranks 22nd in DVOA against the pass. Last week's game turned into a blowout where the Browns ran it 42 times but OBJ still got nine targets, catching five of them for 77 yards. I feel that is his floor this week with huge upside in a game where there should be more volume through the air in a projected closer game.

While OBJ is destined to be chalk this week, I think we can separate ourselves by pairing him with his quarterback. I think he will be low-owned for two reasons starting with the fact his price is sandwiched right between Jalen Hurts and Sam Darnold who are likely to be Top 3-5 owned plays at the QB position this week. That and the fact Baker has only tallied two touchdown passes. I am not concerned, however, as Baker has been very efficient completing 74% of his passes which is 5th among starting QB's and has given him a very consistent floor for fantasy. The upside is always a concern as the Browns are a run-first team but what stands out here is that Baker already has three completions over 40 yards(3rd most in league) and is ranked Top 10 in air yards per attempt(9).