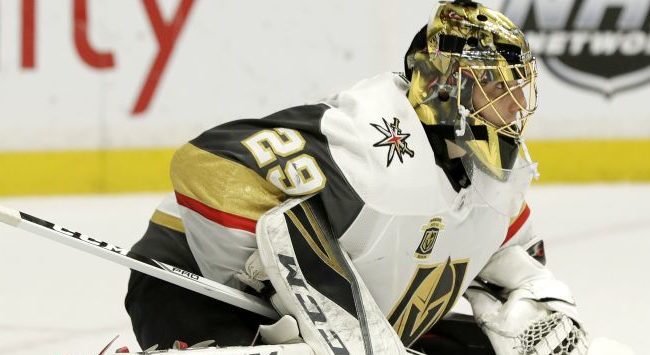 Welcome back hockey fans. Thursday is a very busy night in the NHL with 12 games on the schedule so let's jump in and take a look at some of the core plays at each position. Then make sure to grab a copy of my DFS NHL Cheatsheet and then head over and check out our all-new NHL Optimizer tool where you can create up to 50 lineups.

There are two goalies that stand out above the rest tonight and I will start with Marc-Andre Fleury who is the cheaper of the two on both sites. He was my top goalie on Tuesday and he didn't let us down stopping 27 of 29 shots en route to beating the Rangers and has now won five straight and seven of his last nine starts while allowing over two goals just three times. Like I mentioned on Tuesday, Fleury has been elite on home ice with a 14-3-3 record, .928 save, and five shutouts. The upside with Fleury is somewhat capped if he doesn't get you the shutout as he is facing under 28 shots per game which makes him a better target in cash games with the win potential as the Golden Knights are -130 favorites.

If it's upside you are after, Vasilevskiy is the way to go at the top of the salary as he has faced just shy of 36 shots per game over his last 10 games and face a Hurricanes team that leads the league with 36.3 shots for per game.  It has been a roller coaster ride for Vasi lately as he has given up five goals three times in his last 10 games but has won eight of those with a .919 save % and is coming off a shutout of the Blue Jackets on Tuesday. Tonight, he and the Lightning are -200 home favorites against the Canes who rank 27th overall on offense making Vasilevskiy a nice play in all formats.

I wrote up Seguin on Tuesday and he didn't disappoint with two goals and an assist for 9.5 DraftKings/37.3 FanDuel points. Coincidence or not, Seguin has caught fire since being called out by the Stars CEO and has points in six straight games with 25 shots on goal. Look for that streak to continue tonight against a struggling Flyers team that has dropped eight straight games and ranks 30th overall on defense allowing 3.6 goals per game. All things considered, Seguin is my top overall PTS/$ play on this slate and Dallas is an early favorite for my top stack.

It can sometimes be tough to find value at the center position but one that stands out tonight in a big way is Brock Nelson. He is coming in red-hot with points in four of his last five games including a three-point effort against the Canes last time out and now gets a plus matchup against a Rangers team that ranks 27th in overall defense. Nelson skates on the second line and has also been spending time on the top powerplay unit adding a ton of value. At these prices, he is in play in all formats.

It has been a season full of injuries for Arvidsson but when healthy is a terrific fantasy target. Since returning from his most recent thumb injury, he has provided a high floor averaging 4.1 shots on goal per game and has added five points in those seven games. For the season, he averages over 10 shots per 60 with a 16.8 iCorsi/60  and is just shy of a point per game and the best news is that his top line teammate, Filip Forsberg, has also returned to the lineup from injury. Tonight, the Preds face a struggling Blue Jackets defense that has given up three or more goals in six straight and seven of their last eight games. At these prices, Arvidsson is a great play in all formats.

It is a small sample size for Pirri this season as he has played just eight games for the Golden Knights but he has sure impressed with goals in three straight and 10 points on the season. Not only is he skating on the second line with Alex Tuch and Max Pacioretty but he has also been skating on the top powerplay unit as well. DraftKings has quickly adjusted his price up into the $6K range making him a GPP play only tonight but on FanDuel he can be considered a near lock in all formats at $3,500.

The price for Edler continues to stay way too low, especially on FanDuel, for a player who checks every single box. It starts with the floor he provides for cash games as he has tallied 23 shots and 33 blocks over his last 10 games with a combined 4+ in nine of those games. The upside has also been there as well as he has tallied four multi-point games(nine total points) in that time for an average of 4.8 DraftKings/17.2 FanDuel points per game. The Canucks are home favorites(-130) against a low-end Coyotes team and Edler is an elite PTS/$ play in all formats.

While Parayko does not have the same upside as Edler, he comes at a discount and has provided a consistent floor for cash games. Over his last 10 games, he has just one point but is averaging 2.9 DraftKings/9.6 FanDuel points per game thanks to 29 shots and 23 blocks. The potential for upside is there as he gets a ton of opportunities(22.9 minutes of ice time per game) as a Top 6 defensemen who also skates on the second powerplay unit.