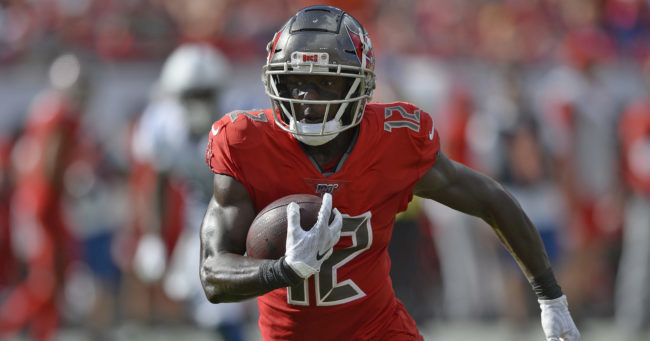 These are just a few of the RB who I am projecting to be chalky and have them ranked in order of preference. I am most confident in King Henry who gets monster volume(26.8 touches per game) and when he doesn't the yardage totals always seems to make up for it with his heavy redzone and goaline usage. Next up is Alexander Mattison who took over for the injured Dalvin Cook last week and was electric totaling 134 yards from scrimmage on 23 touches. He gets a plus matchup in a game with a high total on a team that loves to run the ball.

David Mongomery is in a great spot as Carolina has allowed the 2nd most fantasy points per game to running backs but the Bears are underdogs here in a game with a lower total. The other scary part for GPP formats is that through five games, Monty has just three rushes and two receptions inside the redzone. As for Taylor, he has seen over 50% of the Colts snaps and over 50% of the running back touches just twice in five games. He does have upside in a plus game script on a running team but I will be underweight at these prices.

I have both Gurley and Sanders in the sub 10% range for big tournaments this week and I love the upside for both. Let's start with Gurley who has been low owned almost every week which kind of baffles me, to be honest. I get he is not getting the targets which really takes away the PPR value but he has more than made up for it with his opportunity in the redzone sitting third overall with 24 rushing attempts, converting on four of them already.

He has scored 14+ DraftKings points in four of five games and saw a season-high four receptions last week. He nows faces a Vikings defense that has allowed the 8th most rushing yards(112.6) and 13th most DraftKings points(26.5) per game to the running back position. With Julio off the injury report and Calvin Ridley putting together an elite season, the passing game will be popular and while I will have some exposure, I love the pivot to Gurley who could easily be a part of the optimal lineup on Sunday.

Miles Sanders comes with a ton more risk this week as the Eagles rank 29th in DVOA offense and sit as 7.5 point underdogs which normally doesn't favor the game script of the running back. The matchup alone will probably have people fading him but the Ravens can be exploited by pass-catching running backs as they have allowed the 8th most receiving yards and 13th most yards per reception to running backs. Even in a blowout last week, Joe Mixon still managed 15 DK points despite not reaching the endzone.

This aligns with Sanders strength as well as he is a terrific pass-catching threat and sits third among all running backs averaging 5.8 targets per game. He has also shown he is more than capable of still getting close to his ceiling in a losing effort as he tallied 24 fantasy points last week in a 38-29 loss to a very tough Steelers defense.

All things considered, with his projected ownership in the 5% range you won't need a ton of exposure to have more than the field and take advantage if he goes off on Sunday.

All of the wideouts above are great options this week with combinations of high totals and plus matchups, both on the team and individual levels. Game stacking has been HUGE this season so I am expecting Ridley and Thielen to be right at the top of the ownership this week. For GPP, you don't necessarily have to fade all teh chalk but grabbing a few low owned options to pair with them is a great way to differentiate your lineup for a solo takedown. Let's look at a few.

Both Godwin and Evans were removed from the injury report on Friday and get a juicy matchup against the Packers(25th in DVOA vs. the pass) in a game with a tight spread(GB -2) and high total(54.5). I will get some exposure to both but am definitely leaning Godwin for a couple of reasons starting with the fact he was a full participant on Friday while Evans was limited. Then there is the matchup as Evans is most likely going to be shadowed most of the game by Jaire Alexander who is one of the best corners in the league.

Godwin has dealt with multiple injuries this season but has been efficient when on the field catching 11 of 13 targets for 143 yards and a touchdown. He also operates out of the slot and should see a healthy dose of Will Redmond who has been average at best this season. The biggest risk here is the Packers pass-rush combo of Za'Darius and Preston Smith but I am not overly concerned considering the Bucs offensive line has been elite in pass protection this season.

If you are the ultimate risk-taker, Tyler Boyd is one of my favorite rock bottom ownership plays this week. His teammate, A.J. Green, was questionable all week and was taken off the injury report on Friday and I actually think that helps Boyd avoid some of the top coverage for the Colts. Boyd was held in check against a tough Ravens defense and one of the best slot corners around in Marlon Humphrey. This week he should see a lot of Kenny Moore who ranks outside the Top 50 corners on PFF this season.

If you are building 20 lineups this week, two lineups with Boyd is more than enough to capitalize on the leverage should he go off and a few of the chalkier wideouts bust or post average scores. I will personally have about 10-15% exposure across DraftKings and FanDuel.